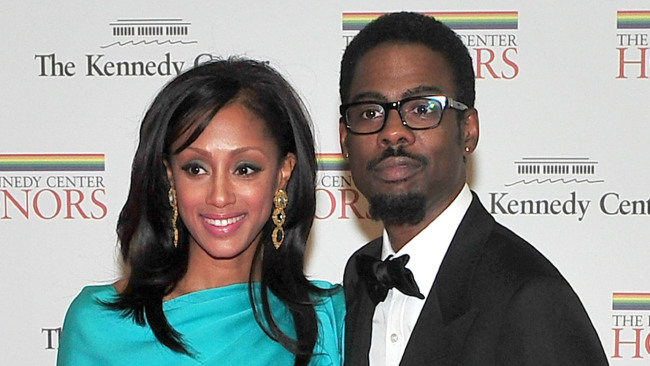 I have to say that I am truly shocked by this. Then again, I am a celebrity gossip writer so no Hollywood divorce should be a surprise. …but 19 years???

Yes, after 19 years of marriage, Chris Rock is getting a divorce. He’s not just getting any divorce, he hired Robert S. Cohen to represent him. Cohen is considered to be one of the best divorce lawyers there is. He has represented Christie Brinkley, James Gandolfini and he is currently handling Richard Gere’s divorce. He is known to be brutally tough in favor of his clients, which indicates that this is not an amicable separation. Cohen wasted no time earning his money. He released the following statement on Chris Rock’s behalf,

Chris Rock has filed for divorce from his wife, Malaak. This is a personal matter, and Chris requests privacy as he and Malaak work through this process and focus on their family.

Malaak then released a statement of her own,

After much contemplation and 19 years of marriage, Chris and I have decided to go our separate ways. My children remain at the center of my life, and their well-being is my top priority. It is in this spirit that I sincerely ask that their privacy and the privacy of our family be respected during this transition in our lives.

The two have two daughters; Lola age 12 and Zahra age 10.

Chris had filed for divorce back in 2006 but the couple managed to worked things out. Although he often poked fun at the institution of marriage, Rock seemed to understand marriage and how to make a Hollywood marriage work. More important than understanding what marriage was, he also understood what it was not. Rock definitely has a lot at stake as he is one of the most successful comedians of our generation with a net worth estimated at $70 million. With his critically acclaimed film ‘Top 5’ still making an impact in theaters his career is arguably at an all-time high.

Here is some of his best stand up on marriage. Warning: Laughter and F-bombs will ensue.