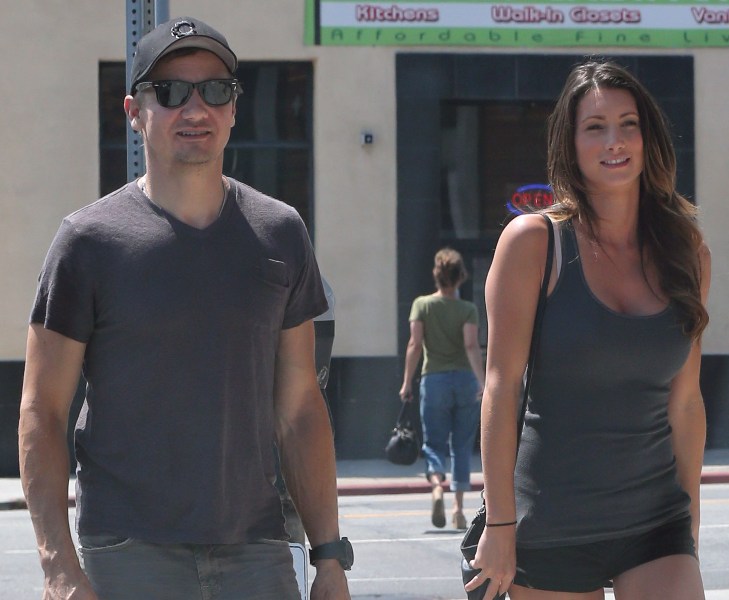 For every holiday engagement, there seems to be a matching divorce. I’m not sure if I like this trend.

Jeremy Renner is the latest celebrity to be thrown into the break up pool. Jeremy’s situation is slightly different then Richard Gere and Chris Rock. Renner has only been married for 10 months! You are not even taking a dump with your wife in the bathroom at the 10 month mark.  What could o wrong in just 10 months?

The actor has been in an on-again, off-again relationship with Sonni Pacheco since October of 2011 when they met on the set of Mission Impossible: Ghost Protocol.  The couple secretly wed 10 months ago and only just announced it this past September. It’s on record that Jeremey has a prenup as he should. The 43 year old actor is worth a healthy $35 million and his soon to be ex-wife Sonni Pacheco I can only imagine is worth considerably less.  According to TMZ, she is demanding that Renner return her stolen passport, her social security card and her birth certificate.  Pancheco is also saying that the Prenup should be voided because it is based on Fraud.
FRAUD? Hmmmm….

Keep in mind that Sonni is only 23 years old. In my, opinion that’s way too young and too hot to be married. With that said at 23 you are also pretty damn immature.   The entire “fraud” thing could be just a way to get back at Jeremy because immediately the “Gay” rumors get reignited and she knows that.  Not to mention that seems to be a hot button for Jeremy.

In an interview with The Hollywood Reporter, Renner went on a rant in attempts to clear up all the discussion about his sexuality. He said the accusation was not true and told us to bud out of his private life,

I want my personal life to be personal, and it’s not f***ing true… And I don’t care if you’re talking about things that are true, you’re still talking about my personal life.. How about I go peek in your window, take what underwear you wore last night, whose husband you were f-ing, and shove that in the megaphone throughout your neighborhood? How does that feel?

I say dude, embrace the gay rumors. It means more faceboook and instagram followers, more movie ticket sales and a bigger brand. Whether you are or not, it’s not that big a deal.  It’s 2015, everyone is gay. I think it’s better to keep everyone guessing.   So at the end of the day you can thank Sonni for putting it back out there, let the rumor linger and bank even harder.

Any break up is rough but this is nothing like Chris Rock’s 19 years of marriage. Sonni is still young and hot, Renner is still relatively young (43 millionaire years = 22 working man years). There are a lot more people to feel sorry for than these two, however we will keep you posted as the details continue to unfold.