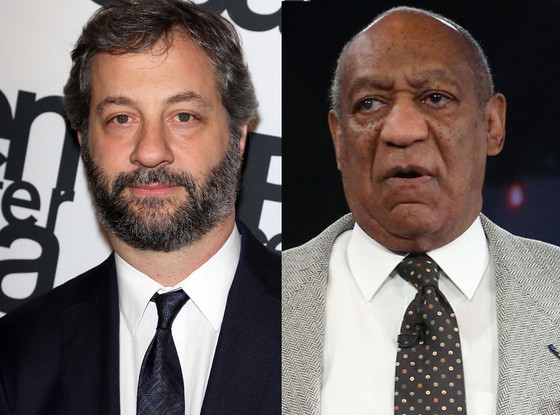 At this point, we think it’s safe to assume most everyone has heard about the multiple sexual assault claims against Bill Cosby. Ever since comedian Hannibal Buress reminded the world that several women have accused the 77-year-old comedian of rape. Telling people at his show to Google, “Bill Cosby rape” when they left the show.

Millions of people must have listened to him, because the allegations against Bill Cosby have been making the headlines for weeks now. And for the most part, several big names in Hollywood have stayed silent on the matter. Before the jokes Sunday night at the Golden Globes, director Judd Apatow was one of the only celebrities constantly tweeting about Cosby.

And he’s received some hate for it. Some people don’t understand why he’s so obsessed with the allegations. Blackish creator Kenya Barris called the director out for being “strangely obsessive” about Cosby on Twitter. Claiming he was ignoring other social issues going on in the world.

Well, during an interview with Marc Maron for the WTF podcast, Apatow explained why he’s posted so many tweets about Cosby.

“I can understand why someone would say, ‘Why does Judd care about this?’ I don’t know, I have two daughters. I’m a comedian. I see him a little bit as our comedy dad. It’s like finding out your comedy dad is a really evil guy. You want to say, ‘Hey, does everybody care about this? That he’s doing that?’ And when the community is pretty silent, then I feel like, ‘Well, if no one is going to talk, then I’m going to talk.’ If everybody was talking about it, I probably wouldn’t have much to say about it. But I don’t want it to suddenly disappear and then he kind of just goes back out on the road and does his thing.”

During the interview, he also said he would love to see Bill Cosby in jail…

I absolutely would like to see him in jail. That’s where people who commit sexual assaults go.

We all know you can’t throw someone in prison without evidence, and it’s pretty hard to prove something that happened so many years ago. That is the sad truth about this situation. If these women are telling the truth, justice will never be served for them. Instead of seeing their evil attacker in jail, they are seeing him making people laugh on stage. That’s absolutely heartbreaking if that is the case.

But to be fair, if this is some big conspiracy against Cosby, that would also be heartbreaking. It’s just frustrating to not know the truth. And it’s even more frustrating to know we probably never will.