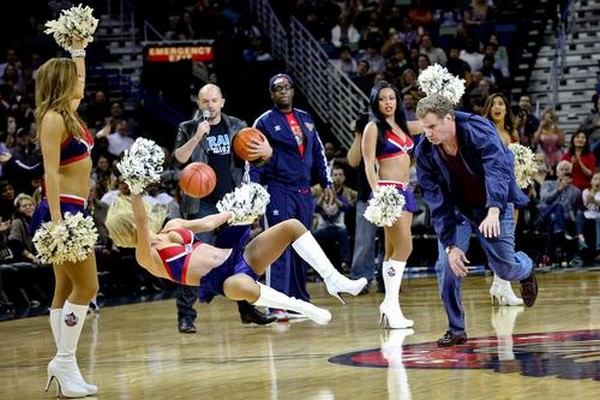 Will Ferrell Smacks Cheerleader In The Face With A Basketball, And We Have The Video! Will Ferrell was dragged out of the Smoothie King Center in New Orleans last night after hitting a cheerleader in the face with a basketball. Why would he do such a thing? Was he drunk? Was she being too cheerful? Was he simply checking to make sure the basketballs were inflated properly?

No. None of those things. It was a staged incident for a movie he is filming with Mark Wahlberg. The film is called Daddy’s Home, and if you’d like to know more information about the film, we got you covered over on our movie site.

But let’s talk more about this ball to the face. The scene was captured by several cameras. You can check out this clip from Kevin Ding’s Instagram account.

Ah, yes. It wouldn’t be a Will Ferrell film without one of his patented meltdowns. I am wondering if they will have to film this scene again, though. If you look closely, you can see that the cheerleader flinches just before the ball actually hits her. Maybe it won’t be noticeable in the film, but right now it’s the only thing I can see.

If you want to see the longer video, which shows Will Ferrell being dragged out by security, then check out the YouTube video down below…

According to NOLA.com, filming inside the arena will take place for several days. Maybe we’ll be treated to another meltdown soon.