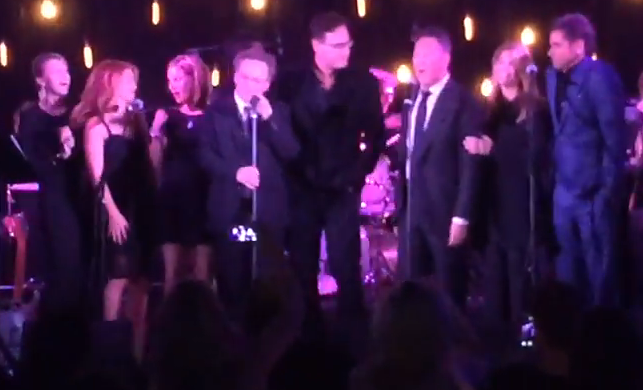 The Cast Of ‘Full House’ Reunites, Gets On Stage To Sing Their Theme Song (VIDEO) We have seen the cast of ‘Full House‘ reunite a few times before. If this was simply a few photos of the crew back together, it probably wouldn’t make it on the site. However, this reunion was special because the whole crew got up on stage to sing the catchy theme song from their hit show.

Well, we say the whole crew, but we all know the Olsen twins didn’t show up. It also looks like Dave Coulier was missing, which is weird because we are 99.9% sure he didn’t have anything better to do. But enough about who wasn’t there, let’s talk about who was there and why they were there in the first place.

They were all together Saturday night to celebrate show creator Jeff Franklin’s birthday, and as a special birthday present, the cast members got on stage to sing their iconic theme song. Andrea Barber posted a short clip of the performance on her Instagram account, but it just wasn’t good enough for us. We needed more, so we searched YouTube and found a longer version of their performance, and it has honestly made our Monday morning suck slightly less.

Brings back some memories, huh? And this reunion certainly helps the ‘Full House Revival‘ rumors. Back in August, Stamos admitted that there had been many opportunities to bring the show back, but none of the ideas felt right.

But recently they came up with something that could work.

Lately there’s one that we sort of are gravitating towards. It’s not a complete reunion, but a twist. If we can get it done right … then we will do it.

We haven’t heard much since then, but it’s clear the gang still loves to hang out with each other. I mean, they got on stage together to sing the theme song to a show they finished over 20 years ago! That’s saying something.