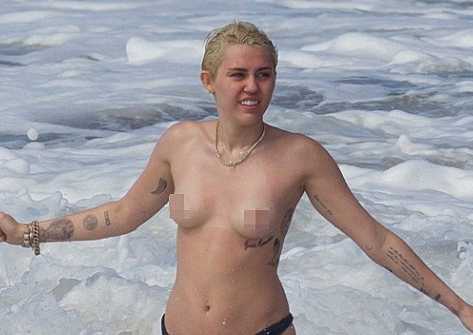 Miley Cyrus Don’t Need No Top, Singer Lets Her Nipples Shine While On Vacation In Hawaii!

Another round of topless photos with Miley Cyrus? We got ’em! The 22-year-old singer went on a little vacation to Hawaii with her boyfriend Patrick Schwarzenegger. During their getaway, the successful couple decided to waste a little time in the ocean.

As you can see in the photos down below, Patrick’s nipples weren’t the only ones in attendance. Miley Cyrus decided she didn’t need a bikini top during their playful date. Of course, Patrick didn’t seem to mind. He couldn’t keep his hands off his girlfriend. How sweet. In addition to giving the paparazzi some wonderful photos, Miley Cyrus and her 21-year-old boyfriend also spent some quality time together at a nice restaurant. One source added that Patrick was protective of his girlfriend when fans stopped her to ask for pictures.

They got stopped by fans right away and were thinking about turning around, but Miley was very gracious and took pictures and kept walking. Patrick thought it was funny and tried to stay out of the way. Patrick was good at protecting her and wrapped his arms around her and kept walking.

Protecting her from what? Chilled out Hawaiians? They aren’t going to do anything dangerous. Why would they? They live in freaking Hawaii!

Everything is “not a problem” in Hawaii. Someone cuts in front of you in line? It’s not a problem. Why? BECAUSE YOU ARE IN HAWAII! You see that face? That is the face of someone who has zero problems.