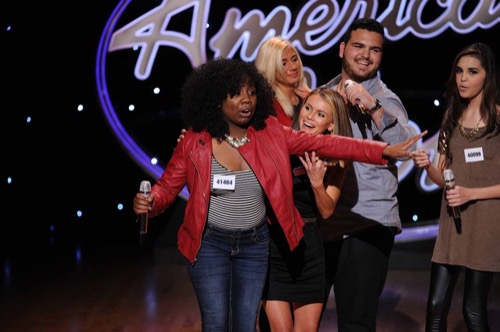 Let’s all take a deep breath. We have survived the group round of Hollywood week! Not only do the contestants hate group round, but fans of the show also hate it. I am a huge American Idol fan, but they should really think about cutting out the group round next year, or at least don’t film it next year.

The judges claim it’s one of the most helpful rounds. That’s hard to believe with all the unnecessary drama going on backstage, and even on stage sometimes. For example, we had to watch Alexis Granville have an ‘anxiety attack’ on stage. I didn’t buy it. It seemed incredible fake to me, but maybe I am just a heartless douchebag. That’s probably more accurate.

Anyway, Granville recovered from her exorcism and actually advanced to the next round, along with Jax Cole. The rest of the episode featured food poisoning, sleepy contestants, J-Lo’s bra, and emotional moments. The saddest moment of the night came when the judges told the homeless Rocky Peter that he would be going home, “I have nothing to go home to.” He said.

At the end of the day, several contestants advanced to the solo round: Joey Cook, Maddie Walker, Mark Andrew, Trevor Douglas, Lovey James, Qassim Middleton, and the list goes on and on.

The most important thing to remember is that group round is now over. Tonight we are treated to the lovely solo round before the judges make their final cuts.

Is your favorite still in the game?