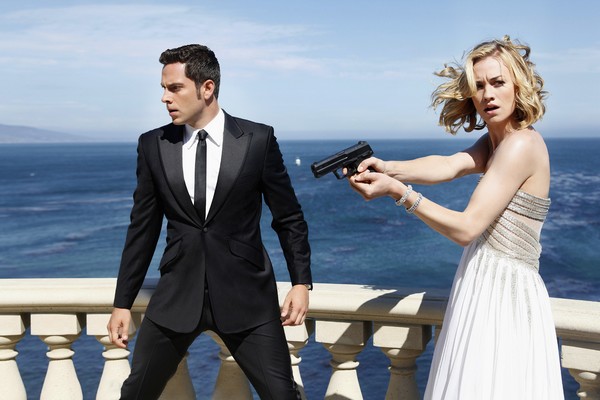 10 Great TV Shows That Were Cancelled Too Soon! Love is hard. You learn that at a young age in life. It’s a magical feeling to be in love with someone or something. You want to be around them every single day. Maybe you share an ice cream cone, take a walk in the park, secretly get each other off underneath the table at Applebee’s. It’s a good time, you know?

But it never does last. Your heart will always get broken. Television addicts know this pain all too well. We are constantly falling in love with shows, only to see them disappear forever just one year later. About: “When a twenty-something computer geek inadvertently downloads critical government secrets into his brain, CIA and NSA assign two agents to protect him and exploit such knowledge, turning his life upside down.”

Why it makes the list: Some people may wonder why I included this show on the list. I mean, it did have five seasons, which is a lot more than most of the shows on this list. And fans of the show (including me) managed to save it once from being cancelled. One could argue that it was actually on air for too long. It just didn’t bring home the ratings, and I’ll admit the show did slide a bit toward the end, but I believe that’s because the writers knew they had to wrap everything up quickly. It all felt so rushed. I wish it was able to feel more secure during its run. About: “A 15-year-old girl and her trials and tribulations of being a teenager and dealing with friends, guys, parents and school.”

Why it makes the list: It was so much more than the “about” you see above. This show was painfully honest and the writing behind this show was flawless. There may only be 19 episodes, but you will not find a bad episode in those 19. Much like Freaks and Geeks, the world just wasn’t ready to accept it. About: “A small town in Kansas is literally left in the dark after seeing a mushroom cloud over near-by Denver, Colorado. The townspeople struggle to find answers about the blast and solutions on how to survive.”

Why it makes the list: I am a sucker for post-apocalyptic shows, and Jericho was one of the best for the short time it was on. The details behind the “event” weren’t exactly as realistic as I had hoped going in, but once you remind yourself that it is just a television show, it’s highly entertaining. You also really felt a connection with the characters, which is usually something I miss from shows taking on a post-apocalyptic story. Fans of this show were extremely passionate, sending over 20 tons of peanuts to the CBS headquarters to show their support for a second season. You’ll get the peanuts reference once you watch the show. About: “Level-headed son Michael Bluth takes over family affairs after his father is imprisoned. But the rest of his spoiled, dysfunctional family are making his job unbearable.”

Why it makes the list: Why not? I don’t think you can make a list like this and not include Arrested Development. Yeah, technically the show is still going on Netflix, but it was cancelled prematurely by Fox after just three seasons back in 2006. It was one of the smartest shows on television, which is probably why it got cancelled. I mean, why waste your time with jokes that actually make you think when you can just react to fake laughter on any sitcom currently airing on CBS? About: “A young woman on the run from the mob poses as her wealthy twin sister to try and evade them, but soon discovers that her sister has a price on her head as well.”

Why it makes the list: It was a great return to television for Sarah Michelle Gellar, but sadly most people didn’t even give the Ringer a chance. Even though it was nominated for several awards after just one season, including “Most Exciting New Series” at the Critics’ Choice Awards (it won btw), people dismissed it unfairly. The ratings just never recovered after the three-month holiday break. About: “In a science-based company, a manager tries to keep control of his scientists while being pressured by his shrewd boss.”

Why it makes the list: I’ll admit, I didn’t watch this show while it was still on ABC. I wasn’t aware of its greatness until I saw it on Netflix a year or two ago. I watched both seasons on Netflix in less than a week. I remember almost crying once I finished the last episode. Not because the last episode was emotional, at least not compared to the classic “O.C.” season finale. I almost cried because I loved the characters so damn much. It was just a show that made you feel good every single time you watched it. It’s a shame more people didn’t know about it while it was still on the air. About: “A show set in the late 1800s, revolving around the characters of Deadwood, South Dakota; a town of deep corruption and crime.”

Why it makes the list: This one should make everyone’s list. Yeah, it did have three solid seasons, but I think we can all agree that we didn’t receive a proper conclusion. For a few years after the cancellation, fans of the show were still holding out hope for a promised TV movie follow-up; however, it doesn’t look like that is ever going to happen. Back in 2012, the creator of the show was asked if the movie would ever be produced, “Never say never, but it doesn’t look that way.” He replied. About: “A television show about two unique groups of teenagers dealing with life in high school during the 80’s.”

Why it makes the list: Do I even need to explain this one? I don’t think I do. Just know that the man who cancelled the show is still trying to defend his decision. Seth Rogen was able to confront the studio exec last year, and he said, “He was like, ‘You know, Judd [Apatow, ‘Freaks and Geeks’ executive producer] wouldn’t listen to my notes.’ He oddly dug in and kind of tried to justify it.” You can’t justify it. They didn’t even give the damn show a chance! They removed it after only 12 episodes. That would be like shunning a potential friend because you didn’t like their handshake. About: “Five hundred years in the future, a renegade crew aboard a small spacecraft tries to survive as they travel the unknown parts of the galaxy and evade warring factions as well as authority agents out to get them.”

Why it makes the list: Creator Joss Whedon really had something special with this show. It was cancelled after eleven of the fourteen episodes produced were aired, but during those few months it developed an incredibly strong and supportive fanbase. In fact, the dedicated fans actually helped create a feature film spinoff titled, Serenity, in 2005. Despite receiving mostly positive reviews from fans and critics, the film only took home $25.5 million at the box office. About: “A pie-maker, with the power to bring dead people back to life, solves murder mysteries with his alive-again childhood sweetheart, a cynical private investigator, and a lovesick waitress.”

Why it makes the list: Every show on this list is great, but Pushing Daisies might be my favorite. Of course, it’s like picking a favorite breakfast cereal. It changes weekly. This show was freaking adorable and it was so different than most shows you see here in America, which is probably why the ratings slowly dropped after the huge premiere. It probably would have worked better on an internet streaming service like Netflix or Amazon.