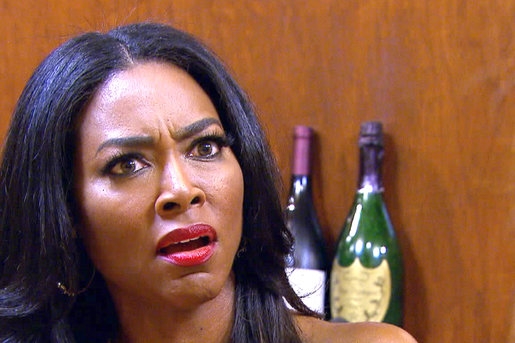 At this point, we are not even sure ‘Mr. Chocolate’ is a real person, but we absolutely love all the drama this fictional character is creating on Real Housewives of Atlanta. As you all know, there has been a rumor going around for months now, claiming Phaedra Parks had an affair with some dude named Mr. Chocolate.

Back in October, the reality star talked about the rumors on Ellen and had this to say…

Well, apparently no one is buying her denial. On the latest episode of RHOA Cynthia Bailey told Kenya Moore and Claudia Jordan about the alleged affair. This juicy gossip obviously intrigued them, so they decided to bring up this mysterious Mr. Chocolate while eating at a Brazilian Steakhouse.

Cynthia claimed she didn’t give a f–k about the details behind Parks’ marriage, “It’s the whore-pocrisy in this group that is disgusting.” She told the cameras.

After Phaedra finally agreed to meet everyone at the steakhouse, she made it clear that she wanted a peaceful dinner. “I don’t want to be in crazy town. I just went to crazy universe.” She said. But sadly, Phaedra just couldn’t escape the craziness. Cynthia brought up the relationship rumors, and you know Kenya had to jump all over that. She tells everyone at the table that Mr. Chocolate is the man Phaedra has been sleeping with.

This caused Phaedra to jump out of her seat, “You’re not going to accuse me of something you don’t know!” She yelled, before walking away from the situation to prevent herself from beating the heck out of Kenya.