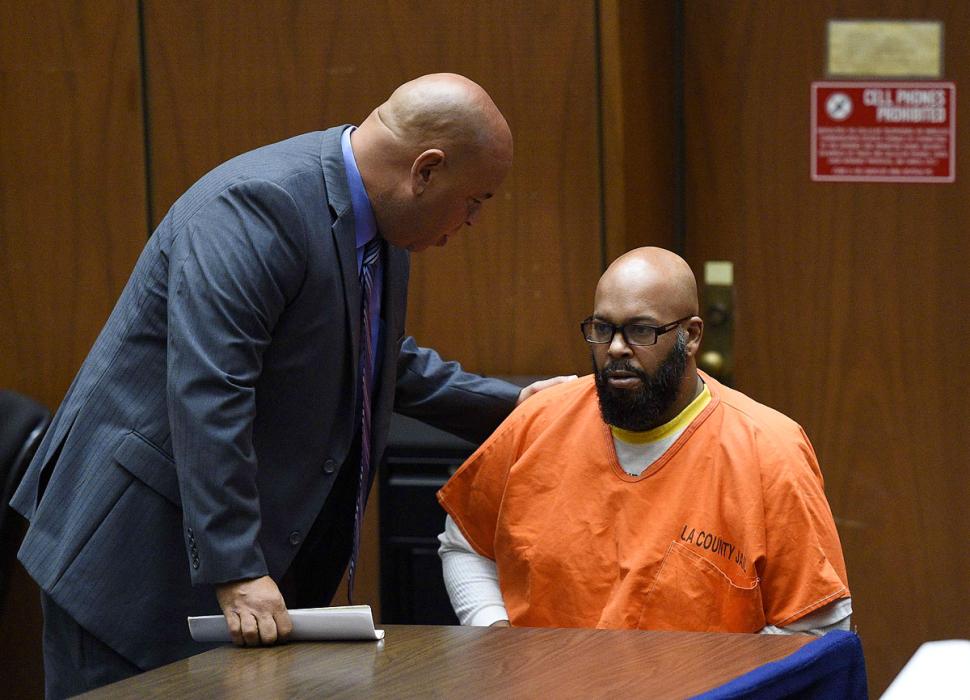 Really? Here is Suge Knight’s Lame Excuse For Plowing Forward and Not Backing up in Horrific Hit And Run Video. The big and bad are never as big and never as bad as they used to be once they get a taste of that orange jumpsuit. Suge Knight and his defense team are claiming that his failing eyesight is the reason that he ran down and killed Terry Carter at a Tam’s Burgers parking lot in Compton.

Once you see the video of the incident, you can agree with Suge on a few things. Yes I agree that Suge was under attack. You could also agree that the first person mowed down, Cle “Bone” Sloan, possibly had a gun. However, we all see that when Knight backed up the first time, he was free. He was potentially out of harm’s way and could continue backing up a little more and then throw the truck in drive and get the hell out of there.

His defense is saying that, this was not an option. Due to his impaired vision that was made worse from the attack, Knight could not veer left .

How can he go left if he can’t see?

This was a literal presentation of being blindsided. He was attacked on his blind side. To me it seems obvious. He’s being punched in the face, he can’t see.

To help give the “can’t see” theory some credibility, Knight has been appearing in court with dark rimmed glasses looking more nerdy than thug.

WHAT ABOUT STAND YOUR GROUND

Although the “can’t see” defense is lame, the stand your ground defense is not, and could possibly be the key to Knight getting set free yet again. Fletcher explains,

If you are reasonably in fear for your life, with two or three men attacking you, you have the right not only to fight back but to pursue the person who put you in that peril,

The lawyer said California jury instruction No. 505 is clear when it states that a defendant claiming justifiable homicide “is not required to retreat” and can even “pursue an assailant until the danger of (death or great bodily harm) has passed.” Fletcher pointed to a case where a man getting robbed violently shot his assailant in the back as she fled. He wasn’t prosecuted and neither should Knight.

Knight has pleaded not guilty to murder and attempted murder. The 49 year old remains in jail on a no bail hold. Knight’s first two lawyers were fired, Fletcher has been hard at work on the case since Monday.