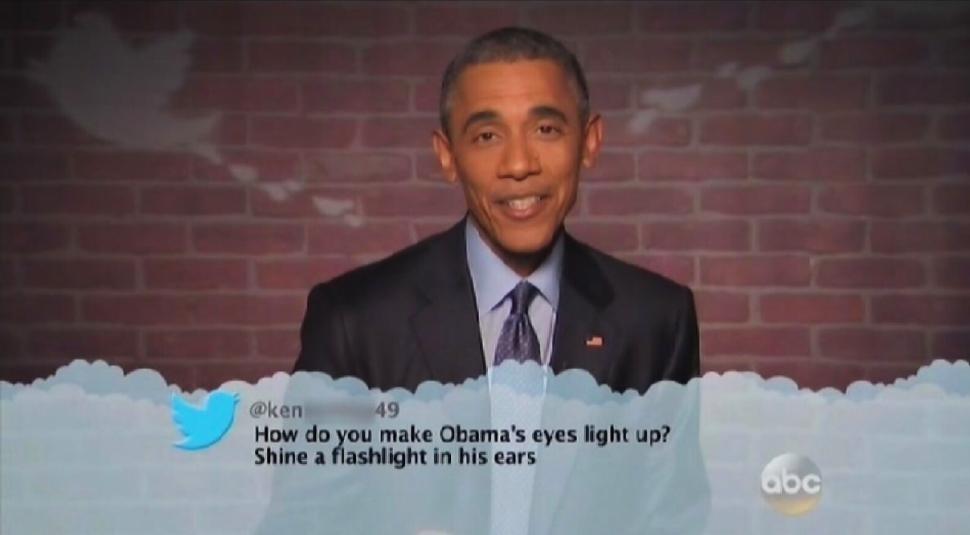 You can say a lot of bad things about Obama, but the President can take a good joke. He was a guest on Jimmy Kimmel Live Thursday night where Jimmy somehow convinced him that a Presidential Edition of Mean Tweets would be a good idea. Jimmy was right and Obama was game.
After the segment Obama jokingly said,
‘You should see what the Senate says about me.’

Of course the Kimmel staff gave the President “the mean but not that mean tweets”. If you look on twitter, you can find a lot worse about Obama. A lot worse.

Obama touched on many issues during his short segment including the recent shooting of two police officers in Ferguson, Missouri. No longer joking, a subdued and serious President said regarding the incident,

What had been happening in Ferguson was oppressive and objectionable and was worthy of protest, but there was no excuse for criminal acts,’

Whoever fired those shots should not detract from the issue — they are criminals, they need to be arrested. And then what we need to do is make sure that like-minded, good-spirited people on both sides — law enforcement, who have a terrifically tough job, and people who understandably don’t want to be stopped and harassed just because of their race — that they are able to work together to come up with some good answers.

Well said. What did you expect, he is the President.

Understanding that this was a Late Night show and not a Presidential debate, Kimmel spared him any questions regarding the latest Secret Service Snafu that hit the media yesterday. And me understanding that this isn’t a political blog, I know you also came here to be entertained, so without further adieu – here is President Obama reading his Mean tweets.