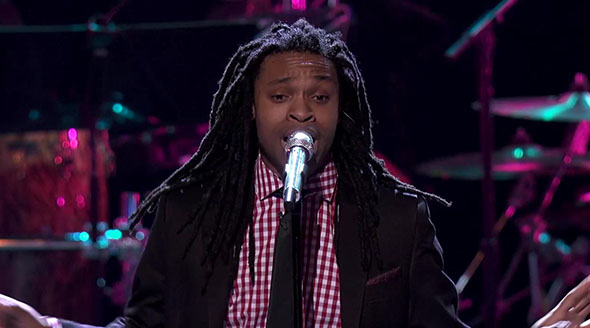 American Idol Movie Night: Check Out The 3 Best Performances Of The Night! (WATCH)

After tonight, there was only supposed to be 10 contestants left, but thanks to an incredible performance by Qaasim Middleton, the judges were forced to use their save. I’ll be honest, things started off slow tonight, but the ending made it all worth it.

Another bonus? The show was back to its two-hour format tonight, which I actually enjoyed. The one-hour performance shows just felt so rushed, and we were never able to create a real connection with the contestants.

That changed tonight. Even though most of the contestants had an off-night, it still felt more like the American Idol we all know and love.

Here are my three favorite performances of the night…

I loved this girl from the moment she appeared on my television screen with her adorable smile and “squeeze box.” However, I will admit I was beginning to worry she reached the top of her personal mountain. We’ve seen her quirkiness, but is that all she has to offer? Nope. She proved that she is a real artist tonight with the beautiful Mad World performance. She picked a perfect song, her voice was haunting and she really connected with the lyrics.

This proves she hasn’t reached her peak.

Quentin Alexander – “You’re the One That I Want”

The judges (especially Harry) didn’t like this performance, but I was certainly feeling it. You know, Harry was complaining that he was out of tune the entire time, and that might be the case. He certainly knows more about music than I do. However, as just your average viewer, I didn’t hear what Harry did. I felt the words he was singing, and that’s all I look for in a performance.

What do you think? Is Harry right? Was it a horrible performance? Should he not be on this list?

Just watch it. Nothing I can say will explain how wonderful this performance is. Wait, I take that back. The fact that the judges used their one and only save this early in the season proves the greatness of Qaasim. I’m not sure why he hasn’t been getting the votes, but hopefully the show he just put on will wake up America.

VOTE FOR THIS MAN!