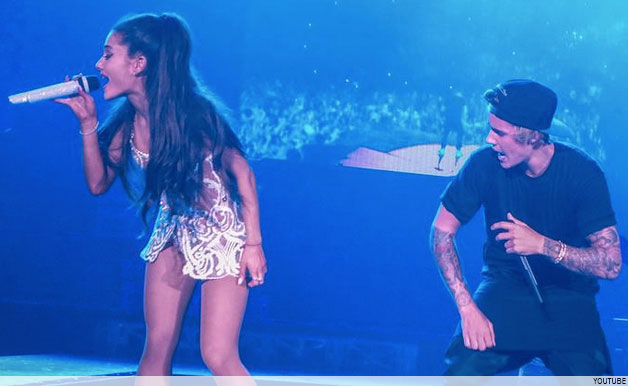 Justin Bieber Shocks Fans With Surprise Duet During Ariana Grande Concert, Find Out Why He Had To Apologize! (VIDEO)

Justin Bieber did what he does best Saturday night in Miami: he made thousands of teen girls lose their freaking mind. The Biebs returned to the stage for a surprise performance with Ariana Grande during her Honeymoon Tour. He joined her right in the middle of her song, Love me Harder.

But unfortunately, the 21-year-old star didn’t love hard enough. He actually forgot a few of the lyrics during the duet; however, we will give him credit for playing it off so well. Although, he could have started rapping quotes from Step Brothers out there, and no one in the crowd would have noticed because everyone was screaming so loud.

You know who did notice the mistake? Ariana Grande. But Justin Bieber apologized to her after the song ended, and then they continued the show by singing Bieber’s song, As Long As You Love Me. And you hardcore Bieber fans will know that Big Sean created a rap verse for that song, and we only mention that because Ariana Grande is dating Big Sean.

Anyway, check out the video below. Try to find the spot where Justin Bieber messes up, and then stick around to see him apologize at the end of the video.