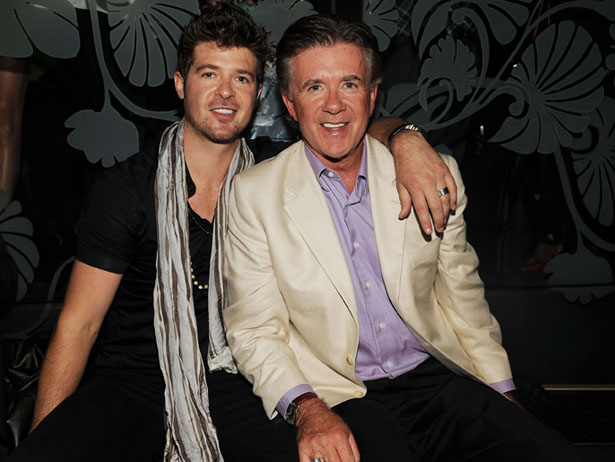 Have you ever wondered where Robin Thicke gets all his creepiness from? If so, we have the answer for you. He apparently gets it all from his father, Alan Thicke. You may remember Alan from the Growing Pains or maybe his role as Rich Ginger on The Bold and the Beautiful? Okay, you probably don’t remember that last one.

Anyway, the 68-year-old actor and his latest wife Tanya Callau stopped by the Us Weekly office in New York City recently, and during their visit, Callau admitted to playing Robin Thicke’s music while having sex with his father, Alan.

When we do get freaky, we love [Robin’s song] ‘Sex Therapy‘ You have to admit, it’s a great song to get in the mood.

WHAT? No, no, no! Do you know how many great “bedroom” songs are out there? SO MANY! Why would they pick this song? This is the strangest thing I have ever heard, and I once listened to some dude have a 10-minute conversation with his poop in a public restroom.

Sadly, that’s not going to help the situation. He can just pull the songs up on YouTube. I still can’t believe Alan can get hard while listening to his son’s music. What the hell.

Next time Robin makes a “sexy” song, he needs to randomly add a “DADDY…I LOVE YOU!” message in the middle of it. #instantbonerkill