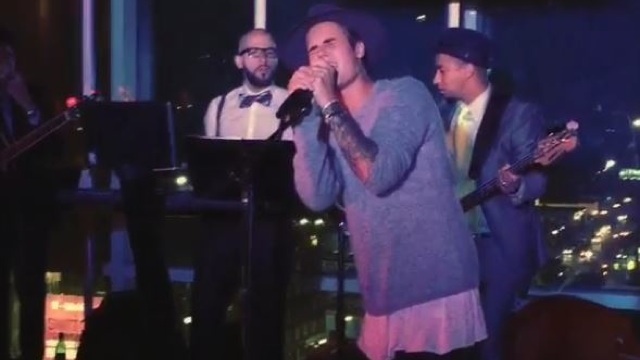 Justin Bieber surprised us all last week with his hilarious video with late night host James Corden. Just a warning, if you click on that link and watch the video, be prepared to like Justin Bieber.

On Sunday, the Biebs dropped by W Hollywood’s Weekly Jazz Night event and surprised everyone with a pretty passionate performance of I’ll Make Love To You. And even though I still hate his singing voice, I’ll give him credit for putting on a show. He even did naughty things with the ground.

It got a little uncomfortable for a few seconds. Check out the video below…

As you can see, the crowd and band were certainly feeling the cover, but did Boyz II Men enjoy it? The answer is yes. They posted the following message to their Twitter account.

Wouldn’t that be something special? Justin Bieber on stage in Vegas with the Boyz? I can just smell all the views on YouTube. By the way, Bieber didn’t just get up and leave after his performance Sunday night.

He was grooving to the music all night, staying until they closed the place down. And at the end of the video above, you can see the 21-year-old pop star thank the band behind him, even taking off his hat.

That and the fact that he didn’t just leave after his performance shows me that he is growing up. It’s a good sign. I think the egg throwing days are behind him.