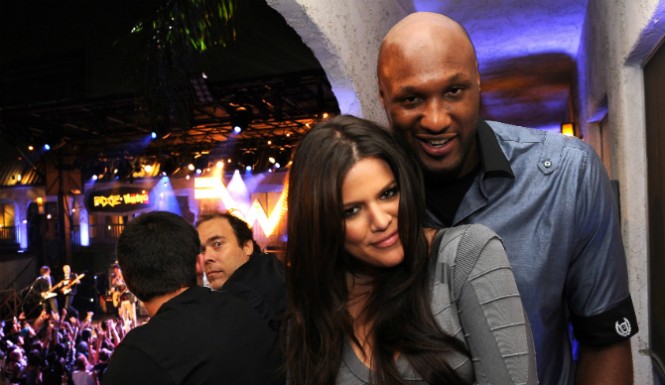 Khloe Kardashian And Lamar Odom Getting Back Together? It’s Possible, According To Lamar!

What? It’s 2015 and we are still talking about Lamar Odom and Khloe Kardashian’s marriage? It sounds strange, but nothing has happened since Khloe filed divorce docs way back in 2013. It’s been over a year now, and neither Khloe nor Lamar have done anything with them. In fact, TMZ reports that a judge is threatening to dismiss the divorce filing due to lack of action.

But of course, this doesn’t mean they are getting back together. We know Khloe has dated a few guys since the split with Odom. We know she has been trying to move on. However, cameras caught Odom out in Santa Monica on Monday, and he told the cameras that there is still hope.

When the photog asked the former NBA star if there is still a chance they’ll get back together, he responded with, “Of course. (Khloe) is still my girl.”

Interesting, right? BUT WAIT, THERE’S MORE…THERE IS ALWAYS MORE! Not even an hour after this latest story with Lamar was released online, Khloe posted the following message to her Instagram account with the title, “Broken Hearts.”

“I know you’ve lost someone and it hurts. You may have lost them suddenly, unexpectedly. Or perhaps you began losing pieces of them until one day, there was nothing left. You may have known them all your life or you may have barely known them at all. Either way, it is irrelevant — you cannot control the depth of a wound another soul inflicts upon you.
Which is why I am not here to tell you tomorrow is another day. That the sun will go on shining. Or there are plenty of fish in the sea. What I will tell you is this; it’s okay to be hurting as much as you are. What you are feeling is not only completely valid but necessary — because it makes you so much more human. And though I can’t promise it will get better any time soon, I can tell you that it will — eventually. For now, all you can do is take your time. Take all the time you need.”

What does this all mean? It sounds like there is still some love between them, but it also sounds like Khloe still wants to move one. She’s just having trouble doing so.

We’ll see what happens. What do you think? Will they get back together?