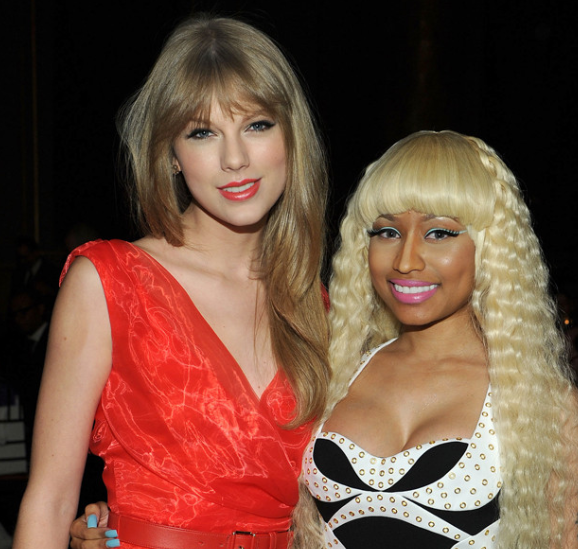 Nicki Minaj And Taylor Swift (And Kim Kardashian?) Have The Worst Twitter Feud Ever!

We have reported on some solid Twitter arguments before. You have Iggy Azalea and Papa John’s (seriously) and the Amber Rose fight with Khloe Kardashian. Those were both entertaining Twitter fights, but the tizzy that happened last night on Twitter between Taylor Swift and Nicki Minaj? It was pathetic.

First of all, they were arguing about the freaking MTV Video Music Awards nominations. Who even cares about this award show? If anything, YouTube should be the one hosting this event. No one brags about receiving an award at the VMAs, at least they shouldn’t, which is why we didn’t understand why Nicki was so upset about her VMAs snub. But if you dig a little deeper, you’ll see it’s not just about the VMAs.

As you can see, Nicki Minaj was feeling a little salty. And even though she didn’t call any artist out by name, many people believed she was taking a shot at Taylor Swift and her Bad Blood music video.

Swift replied to Nicki with this message…

Of course T-Swift was going to take Nicki’s tweet personally. Because every single thing must be about her, right? Don’t get me wrong, I love Taylor Swift. She is a good person who does a lot for her fans, but sometimes she needs to take a step back and just let people express their frustration. Believe it or not, there are things in the world bigger than Taylor Swift.

And Nicki tried to explain that with her next tweet, saying, “Huh? U must not be reading my tweets. Didn’t say a word about u. I love u just as much. But u should speak on this. @TaylorSwift13.”

This is where Kim Kardashian’s booty accidentally knocked everything off the dinner table. The reality star posted the tweet you see below… Apparently, she had no idea what was going on between Swift and Nicki. She just thought that caption was perfect for the photo. “Wait wait I’m in Paris it’s the middle of the night. I’m not trying to shade anyone! That’s not my style! I just thought that caption was perfect for that pic! Changing the caption now! #ironic.” She wrote on her Twitter account after people started to send her some nasty tweets.

So where do we all stand right now? Well, Taylor Swift ended things by telling Nicki to join her on stage if she does win the award for Bad Blood. “You’re invited to any stage I’m ever on.” She tweeted.

And Nicki? Well, she’s still trying to make sure everyone gets her message, which had nothing to do with Swift. She was simply being critical of the racist media, and the funny thing about this whole situation is that this feud actually showed off the racism even more. Multiple sites have twisted this story. Making Nicki Minaj seem like this evil person who was picking on the poor T-Swift. This is why people should just come to our website for all their gossip needs. We will always give you both sides of the story, even if we secretly only agree with one of them.