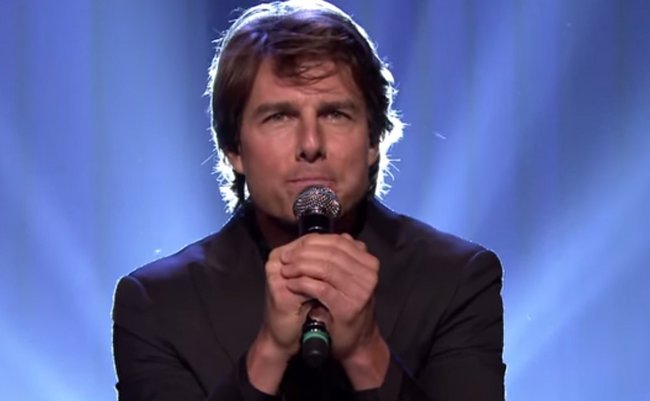 Tom Cruise might be in one of the most dangerous “clubs” in the world, but he’s still one of the most lovable stars in Hollywood. The man loves to entertain, and he will always give you 100%. It doesn’t matter how big or small the project might be. If there is an audience, you will be seeing the best of Cruise.

The 53-year-old actor was on NBC’s Tonight Show Monday night, and during his appearance, Jimmy Fallon challenged him to an entertaining lip sync battle. Before the battle went down, Cruise said, “This is going to be ridiculous.”  And he was right. It was ridiculous, but in the most satisfying way possible.

As always, we’re not going to spoil the video for you. We should you warn that you will want to watch this until the end. Don’t listen to Tom’s last song and think the fun is over.

Wait for the ending and you won’t be disappointed…

Worth the 10 minutes, right? Makes you want to watch Top Gun? We understand. If you’d like to hear what Tom Cruise said about a possible sequel to the film, click on this link to check out our movie site.

Also, is anyone else finding it difficult to believe Tom Cruise is 53-years-old?