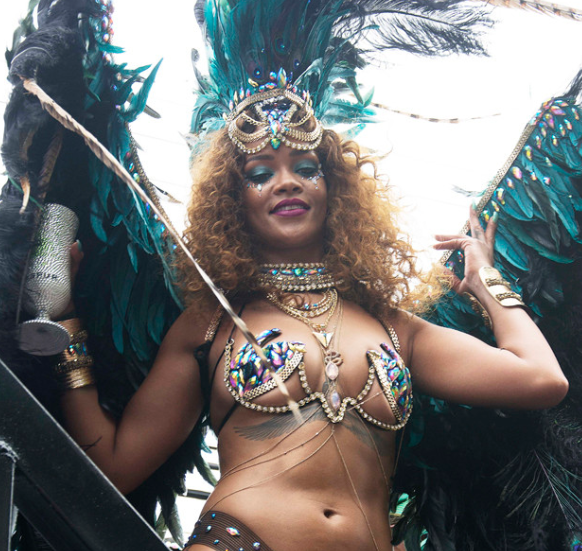 Watch: Rihanna Twerks And Shows Off Her Incredible (Nearly Naked) Body In Barbados!

Are you upset because it’s only Tuesday? The weekend still seems so far away, but we just might have something to cheer you up. It’s that time of the year again where Rihanna gets a little crazy in Barbados.

The 27-year-old singer celebrated the Kadooment Day parade by rocking a custom Kadooment Day ZuluIntl Mockingjay costume. If Katniss showed up to the Hunger Games looking like this, there wouldn’t be anybody trying to kill her. The other people inside the arena would be killing themselves just to let her hotness live on.

And if she started to shake her a** like this during the opening ceremonies? She would be the only tribute getting sponsored…

What’s that little noise I hear? Is that a parachute dropping down? Hopefully Peeta baked her some fresh bread because that booty needs some carbs!

Sadly, it looks like that booty might be claimed. Rihanna wasn’t partying in Barbados by herself. She was spending a lot of time with Formula One race car driver Lewis Hamilton. Romance rumors have followed Rihanna and Lewis around for a while now, but sources continue to claim they are just friends.

In fact, one insider told E! News that Rihanna is still dating soccer star Karim Benzema. Rumors of their relationship first started to hit the internet back in early June. It looks like they taking things slowly. Sources say they don’t want to rush things.

We’ll see what happens. In the meantime, enjoy that glorious video.