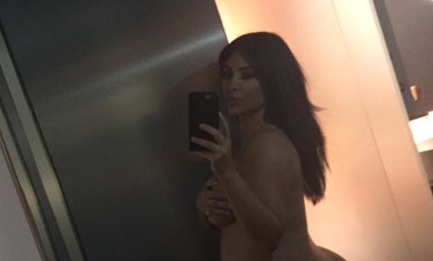 Oh snap. Florida news anchor John Brown is probably extremely upset right now. Why? Because Kim Kardashian just tried to break the internet again with her latest nude selfie. Apparently, there have been people calling out the 34-year-old reality star for allegedly faking her second pregnancy.

As you know, she and Kanye West struggled while trying to have this second baby. Some doctors didn’t even believe they could have another child, calling the first one (North West) a miracle. This, along with several photos showing her looking bigger and then significantly smaller the next day has made some people suspicious.

So she decided to shut the haters up by posting a nude selfie to her Instagram account. The photo already has over 1.6 million likes and over 130,000 comments. I think you all know me well enough to know I would document the process if I got a surrogate. Everyone’s body is different, every pregnancy is very different! I’ve learned to love my body at every stage! I’m going to get even bigger & that’s beautiful too!

You can check out her full message by clicking this link. Sadly, this photo won’t do anything to silence the haters. Kim could post a CLOSE UP Instagram video of her giving birth, and people would still be like, “FAKE, FAKE, FAKE…WHAT DID MICHAEL BAY DIRECT THIS PRODUCTION?”