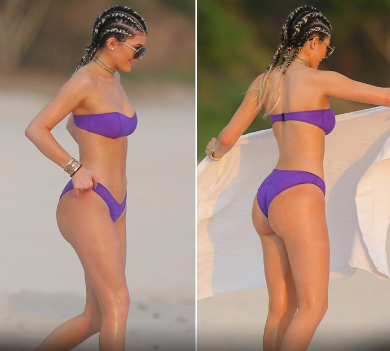 According to TMZ, the company has offered her a $10 million deal for a sex video featuring her and Tyga. “Kim’s sex tape helped launch her career and would be nothing but positive for you.” Hirsch told her in a written statement.

But this time, Vivid Entertainment has some competition. BangYouLater is also offering Kylie an incredible deal. They are willing to give the reality star $1.8 million up front, and they also believe this could be the biggest sex tape in history, “This event will make you even more famous than either Kim K or Paris Hilton.” We should note that they do have a few requirements. For example, they want the video to be at least 22 minutes, which puts a lot of pressure on Tyga. There is a third offer coming from Digital Playground. They want Jenner to become a “Brand Ambassador,” but they also wouldn’t stop her if she decided she wanted to star in a video herself…

Now that you are of legal age, we would like to offer you the opportunity to be Digital Playground’s Brand Ambassador! We know you’ll be great at this and with your banging body to match, maybe you’ll be interested in becoming an adult star yourself!