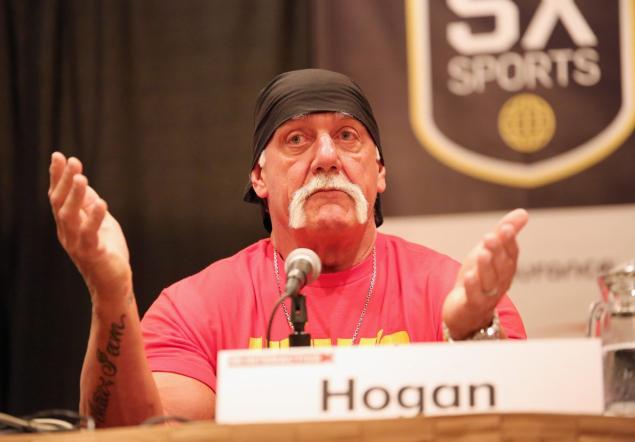 When will white celebrities learn? You just can’t get away with dropping the n-bomb. Hulk Hogan showed up on Good Morning America to apologize to fans for the racist sex tape rant,

The story originally broke when Gawker posted a sex tape of Hulk Hogan getting it on with a friend’s wife. The 30-minute tape has disappeared from the internet, pending litigation, and for that, we at TV Smacktalk are eternally grateful. The only kind of useful purpose a tape like that could serve is to be used to get prisoners to break during interrogation at Guantanamo Bay.

However, Hulk’s lawsuit regarding the tape wound up revealing far more than just the size of his…little Hulkamaniac. Instead, it revealed this little tirade the Hulk spewed out after taking a call from his daughter.

I mean, I’d rather if she was going to f*ck some n*gger, I’d rather have her marry an 8-foot-tall n*gger worth a hundred million dollars! Like a basketball player! I guess we’re all a little racist. Fucking n*gger.

After losing several endorsement deals, and getting fired by the WWE, the Hulk finally came forward and apologized, blaming the majority of the tirade on a racist upbringing.

The word was just thrown around like it was nothing. I was at the lowest point of my life to the point where I wanted to kill myself.

He asked for forgiveness from his fans and finally said

If everybody at their lowest point was judged on one thing they said and let’s just say in high school, you may have said one bad thing and all of a sudden, your whole career was wiped out today because of something you said 10 or 20 years ago, it’d be a sad world. People get better every day. People get better.

Unfortunately, his plea might come too late. As Mel Gibson and Michael Richards both know, you just don’t come back from a racist rant, no matter how many times you apologize. If the Hulk’s lucky, he’ll get a decent settlement from the lawsuit set to go to court against Gawker in early 2016, but it’s highly unlikely we’ll see him returning to the WWE.