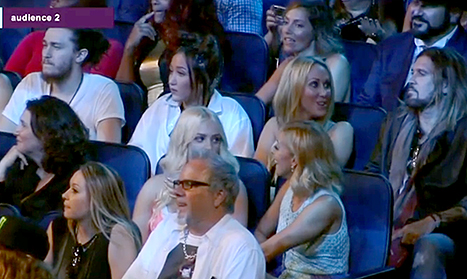 You thought the drama from the 2015 VMAs were over, huh? After all, it’s been like four days since the event took place, which is closer to four months in Hollywood. We move fast with celebrity drama, but we have to pull the Miley Cyrus and Nicki Minaj beef out of the oven one last time.

Earlier this week, we showed you Miley’s stunned reaction when Nicki called her out during the show. And now we have something even better. We have video footage of the entire Cyrus family’s reaction to Nicki calling their little star a “bitch.”

This video doesn’t prove the fight was 100% legit, but it does prove Miley’s family knew NOTHING about it. They were clearly shocked. Her poor brother was about to pull that facial hair right off his face. Tish didn’t know what the hell was going on, and Billy Ray was just like, “Is it too late to get my mullet back?”

That’s so magical. Award shows putting cameras on every important celeb in the audience is the best idea of the last 10 years. Wait, McDonald’s decided to start serving breakfast all-day starting in October, right? That’s probably the best idea. It’s going to save a lot of tears.