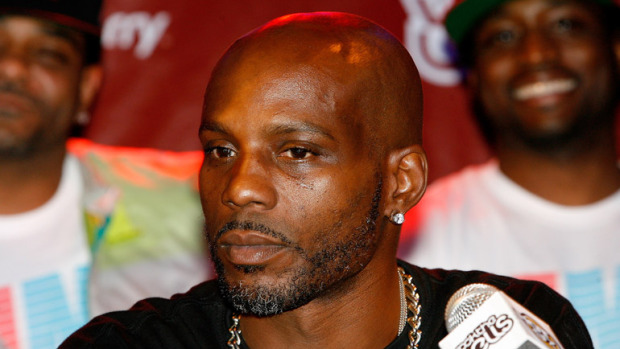 Meet DMX’s son Xavier. Xavier like his father wants to get into the music industry and is looking for funding to get things started. Unlike his father, it appears that Xavier is not that talented. (Video proof of this claim is below).

“X” is currently locked up at New York’s Erie County Holding Center for not paying child support.  According to court records, DMX owed nearly $400,000 in unpaid child support at the time he was placed in jail. While he’s doing his 6 month bid, his son Xavier is taking advantage of the situation and selling the things that DMX left at the house when Xavier’s mom kicked him out back in 2007. Reports say that not only did Xavier not have permission to sell these items, but that DMX is pissed. The plaque that’s listed on Ebay is for DMX ‘s first three multi-platinum albums and was placed on the site for a “buy it now” price of $3000. At the time I’m writing this, Xavier didn’t get the $3000 he was looking for and accepted a “best offer”. Who knows how low that offer really was.

In the posting on Ebay, Xavier Simmons writes,

This is his son. If you follow the media then you know we don’t have the most amicable relationship.

If you think about DMX’s career, three multi-platinum albums is pretty remarkable.   I’m sure those plaques have way more sentimental value then dollar value.  This is something that Xavier didn’t consider.  Honestly, if you want $3000 how about getting a job and saving up the money.

BUT CAN THE BOY SING?

We first got wind of Xavier’s singing skills when DMX was on Iyanla Vanzant’s show, “Fix My Life”. He was awful then and he is still awful.  I thought he might have just been sick or the sound guys at “Fix My Life” were on lunch break.  Nope.  Xavier just sucks.  Here’s a song he calls “Push”, as in “Push” him off the back of that pick up truck so he can stop singing.

…And here is my favorite Iyanla clip of all time. DMX meeting up with Xavier and “X” snapping on Iyanla telling her to stop talking! This is Youtube Gold! At 6:05 “X” goes off!! There should be a platinum plaque for anyone telling Iyanla to “Shut the F Up”.