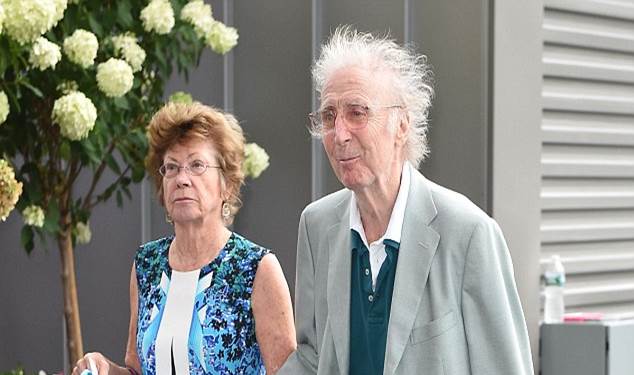 OMG! Shockingly Thin Photos of Gene Wilder Surface; However His Wife Says His Cancer Has Not Returned. When I first saw these photos, I had an instant recall to the photos that help get this site started. We were one of the first sites to reveal the photos of a sick Steve Jobs. Wilder’s photos look the same and give you the same feeling that Wilder is not in good health. However unlike Steve Jobs, Wilder is 82; Jobs was only 56. These photos were taken as Gene and his wife attended the US Open in New York.

Wilder was diagnosed with Non-Hodgkin’s Lymphoma in 1999. He underwent surgery receiving an autologous stem cell transplant in 2005 and has been in remission ever since. Radar Online (not the most reputable site in the world) posted a story with the title in the URL stating, “Gene Wilder Fighting for Life After Cancer Returns”, however the headline of the actual story reads: Fighting for His Life Gene Wilder Shockingly Frail As Friends Fear Cancer Has Returned. That is two different stories.

WHY THE HEADLINE CHANGE?

We are not sure if the headline actually changed or if that URL was created to get traffic with a different headline. What we do know is that the post on Radar refers to “sources” and “Neighbors” as being quoted stating that they believe that his cancer has returned. However his wife confirmed that it has not. Wilders 2nd wife, Karen Boyer (seen with him in the photos), has been married to Gene since 1991. She released a statement to the press in attempts to squash any rumors,

“(He’s) just fine. The cancer hasn’t returned and he’s as active as any man his age can be. He still gets out and about.”

Is she telling the truth? Who cares, he’s 82 and he looks 82. It’s just sad that we have to age at all. The reason for even creating this story was twofold: 1. Because I was shocked as hell how old Gene Wilder is (which means I am crazy old) and 2: As a reminder to al TVST readers to celebrate people while their still here.

It would be great if the Oscars or one of the 50 Trillion award shows can honor Gene while he can still accept the award and address the crowd.   He might even have a few jokes.

Willy Wonka, despite it not being a blockbuster at the box office, will always remain an American Classic. After that the list of classics films is staggering: Death of a Salesman, Bonnie and Clyde, The Producers, Blazing Saddles, Young Frankenstein, Stir Cazy…

I would much rather see Gene Wilder in the lifetime achievement portion or an award show rather than the Memorandum.