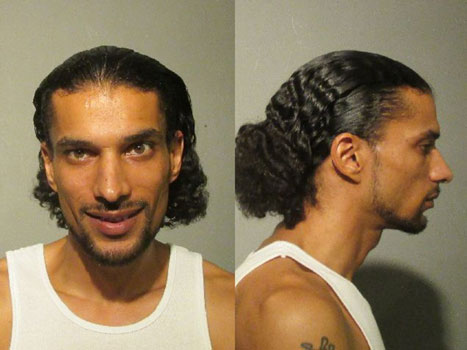 Remember one of American Idol’s strangest contestants Corey Clark? The one who accused Paula Abdul of initiating an affair with him during his time on the show. Oh yeah, you true Idol fans will remember that. It was HUGE news at the time. The dude even went on talks shows to discuss the alleged affair, claiming that Abdul confessed her love for him several times.

A few months after he started spreading these rumors, an internal investigation by an independent counsel determined that Clark’s claims of a sexual relationship, “have not been substantiated by any corroborating evidence or witnesses, including those provided by Mr. Clark, and Ms. Abdul expressly denies that any such relationship ever existed.”

Anyway, that was 10 years ago. Clark is now 35-years-old, and he’s still getting into trouble. His estranged wife, Monica, claims that he broke her protective order against him, which clearly states he can only talk to her through email, and the conversation must be about their children.

Once Clark started sending her emails asking about her new relationship, she stopped replying to him. So what did he do? He started following her around. He followed her to a restaurant and stared at her like a creeper while she ate dinner.

Police arrested him earlier this week on charges of aggravated harassment and violation of a court order. According to the reports, Monica has a number of emails showing his inappropriate behavior. One message reading, “You still fill my heart with so much joy whenever I get the chance to see you. I wish things were different with us. I wish things were better for us.”

Cops claim Clark was trying to argue with them while he was being arrested, “While processing Clark he continued to argue over the fact that he could email [his wife] anything he wanted.”