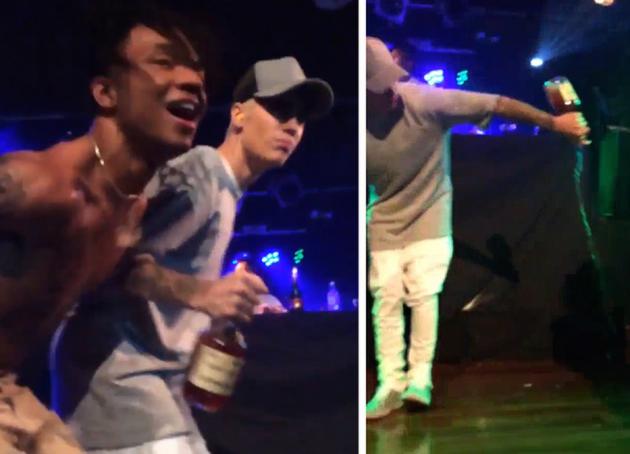 Is Justin Bieber Going To Disappoint Millions Of People Again? Find Out What He Did On Stage That Has People Worried!

He cried. Delicious man tears fell from his eyes. He went down on his knees and showed millions of people his pain after his performance at the 2015 MTV Video Music Awards. It was THE moment people were going to look back on and say, “This was the moment Bieber changed. He’s now a man. Justin Timberlake 2.0 here we come.”

But now people are starting to wonder if the change was only temporary. The Biebs has slowly been working himself into bad situations the past few weeks. His latest mistake happened onstage in New Zealand with Rae Sremmurd.

While having himself a good ol’ time, the 21-year-old singer decided to smoke a little weed on stage. He then washed down the good stuff with a bottle of Hennessy.

First of all, people actually pay money to see three dudes mumbling and dancing like they have poop in their pants?

But seriously, is Justin Bieber going back to being high 24/7? I mean, I fully support legal marijuana, but people like Justin need to limit themselves. Sources say he was always high during his disruptive days. Just constantly smoking and making bad decisions.

And then you combine that with alcohol? Justin doesn’t need to be around that right now. Maybe a few years down the road when he can get blasted one night, and then have no desire to do it again the next. But right now it’s pretty clear Bieber enjoys it too much. He’s only 21-years-old! This party atmosphere is addicting.

We’ll see what happens. Sources say Justin does regret his actions on stage. He claims he was only doing it on a dare.