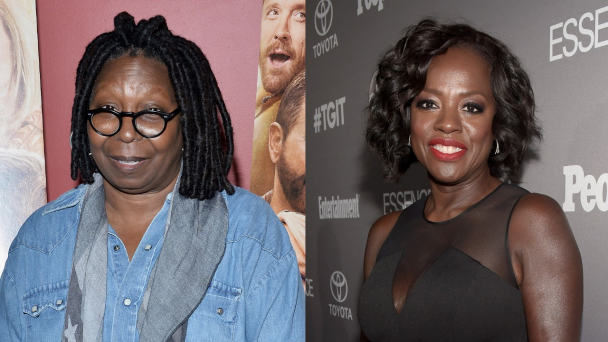 Whoopi Is Not A Fan of Viola Davis’ Emmy Speech. Insists Black Women Have Had “Plenty of Opportunity” During an interview with BET, Goldberg could not hold back regarding how she felt about Viola Davis’ Emmy speech. If you don’t remember, Viola was super emotional during her acceptance speech. She also used a super dramatic Harriet Tubman quote emphasizing the fact that women of color did not have a lot of opportunities. Let me refresh your memories; here is what Davis said,

In my mind, I see a line. And over that line, I see green fields and lovely flowers and beautiful white women with their arms stretched out to me over that line. But I can’t seem to get there no how. I can’t seem to get over that line.’ That was Harriet Tubman in the 1800s. And let me tell you something: The only thing that separates women of color from anyone else is opportunity. You cannot win an Emmy for roles that are simply not there. So here’s to all the writers, the awesome people that are Ben Sherwood, Paul Lee, Peter Nowalk, Shonda Rhimes, people who have redefined what it means to be beautiful, to be sexy, to be a leading woman, to be black, and to the Taraji P. Hensons and Kerry Washingtons, the Halle Berrys, the Nicole Beharies, the Meagan Goods, to Gabrielle Union. Thank you for taking us over that line. Thank you for the Television Academy. Thank you.

For me personally it was over the top, a little slap in the face to the Emmys and not really the time and place. However, it’s a great award and a historic win and at that time you have the right to say whatever the hell you want.  You just have to live with the fall out.

Whoopi disagreed with the premise, but as I watch the clip of the interview (shown below), it appears she is not throwing shade at Viola, she is just honestly sharing her viewpoint. She says that it’s not so much as the roles not being there, it’s that the women playing the roles were not winning the awards.  They are not getting the recognition they deserve.  She says,

Well, I’m not sure what it means. Opportunity to do what? The truth of the matter is there’s been plenty of opportunity. I mean, Scandal. Let’s just start with that. Kerry Washington is there and she’s working her booty off, okay? But they didn’t vote for her.

So, maybe the question is, ‘What do you have to do to get voted on? That’s the thing.

Whoopi angered a lot of people with her comments but she has a valid point. Viola was very emotional and should have gone after the acknowledgement rather than the lack of opportunity. If she was speaking of movies she might have had a better point as roles for women and men of color are scarce, but regarding television; there have been many before her . One person commented on Whoopi’s statement by rattling off a number of black women in television along with shows created and featuring a predominately all black cast:

However, Davis’ Emmy win was for outstanding lead actress in a drama and most of those references are comedies.  When you look a little deeper there are very few lead actresses in a drama series period. Whoopi and myself would probably have felt much better if she emphasized “women” in drama instead of black women.  It would have been more accurate, slightly more appropriate and gave us a break from the next day looks that we get at work whenever something “black” happens.

Here is Whoopi’s interview clip.  What do you think?  Was she throwing shade or speaking truth?

Whoopi doesn't cosign Viola's Emmy Speech: "The Truth of the Matter is, there's been Plenty of Opportunity…" https://t.co/RzRbp8OCAk