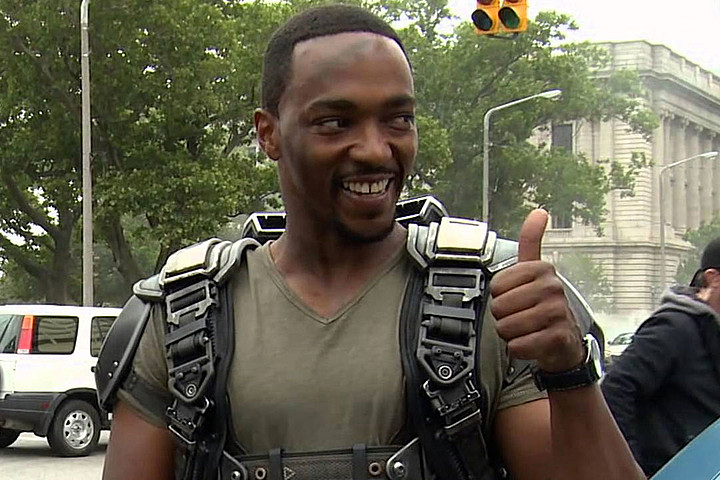 Anthony Mackie Claims His Donald Trump Endorsement Was A Joke, Do You Believe Him? Anthony Mackie is a hot name in Hollywood right now. He’s been landing huge movie roles for years, including Falcon in the Marvel universe, the upcoming comedy Night Before, and the current political drama Our Brand Is Crisis with Sandra Bullock.

But Mr. Mackie almost ruined his good name in Hollywood a few days ago. The 37-year-old actor sat down for an interview with BET, and in the interview he basically endorsed Donald Trump for president…

I would 100 percent want to run Trump’s campaign. 100 percent. I mean, first that’ll be the best party ever when he won, and second, Trump’s an easy sell.

At this point, it kinda sounds like he’s joking, right? He’s just being funny, and let’s be honest, Trump would throw an incredible party if he won.

But then Mackie continued to love on Trump, even claiming he started with nothing and worked his way up?

You know if you look at Trump, he’s an easy sell because you can sell him as the guy who worked his way up from nothing. And I think if you’re a ‘pull yourself up by your bootstraps’ candidate, people would identify with that.

People on Twitter went crazy, sending Mackie messages, asking him why he was supporting the devil. Some people even promised to never watch another movie with him in it again. It was bad.

Phew! Life is good again…but wait just a minute. Has anyone actually watched the video from the interview? It REALLY doesn’t sound like he’s joking. I mean, I know he’s an actor and all, but it seems like he’s 100% serious.

Check it out below, and let us know what you think. At the end of the day, it truly doesn’t matter who he supports. You can still support him as an actor. We all have different views.