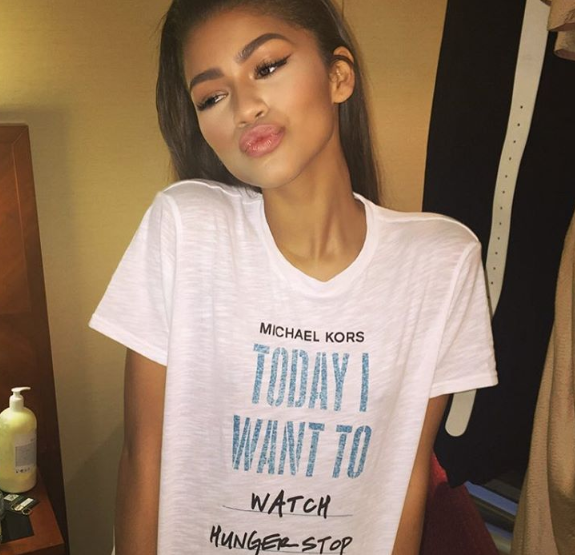 Zendaya Jumps On Her Instagram To Call Out Magazine For Photoshopping Her Hips, REAL PHOTO INSIDE! You would think at just 19-years-old, and with the body of a model/dancer, Zendaya wouldn’t have to worry about being Photoshopped. But apparently, her body just isn’t perfect enough for some magazines…whatever perfect may be.

The singer went on her Instagram this week to call out Modeliste magazine for going a little heavy on the Photoshop with her pictures. She posted the before & after shots side-by-side, as you can see in the photo below. The real version being on the right.

We’re not sure why they thought she would look better with the legs of a chicken, but that’s what they did…

After she complained to the magazine, they did remove the Photoshopped images, but she still wanted to send out a message to all her fans on Instagram.

Had a new shoot come out today and was shocked when I found my 19 year old hips and torso quite manipulated. These are the things that make women self conscious, that create the unrealistic ideals of beauty that we have. Anyone who knows who I am knows I stand for honest and pure self love. So I took it upon myself to release the real pic (right side) and I love it.

And she’s right when says “anyone who knows who I am knows I stand for honest and pure self love.” Zendaya does not mess around. She speaks her mind, and she doesn’t care if you agree with her or not.

I mean, who remembers when those disgusting internet trolls hated on her parents for being “ugly”? She preheated the oven to 450° and put their a** inside for 15-20 minutes until everything was charred.

While you’re so concerned about what my parents look like, please know that these are two of the most selfless people in the world. They have chosen to spend their entire life, not worried about trivial things such as looks and insulting people’s parents on Twitter, but instead became educators who have dedicated their lives to teaching, cultivating and filling young shallow mind.

Just don’t mess with Zendaya or her family. It won’t end well for you.