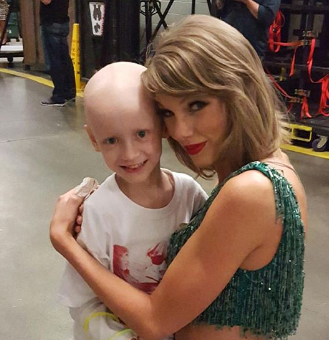 Let’s take a break from the celebrity gossip and talk about something that truly matters. Seeing a child get robbed of all the wonderful moments that make childhood so special is one of the saddest things in the world. And a rare form of cancer is trying to take all those precious moments away from 6-year-old Taylor Rayburn.

In late April, Rayburn was diagnosed with a Stage 3 Wilms’ tumor, which is a rare kidney cancer that primarily targets children. She had to have a surgery to remove a tumor and one of her kidneys, which meant she had to spend her birthday inside the hospital.

Fast forward a few months later to this past weekend, and Rayburn received tickets to a Taylor Swift concert in Atlanta. It was a surprise from her mother Allison. And just seeing her idol perform on stage would have been enough for Rayburn, but it wasn’t enough for Taylor Swift and her mother Andrea Swift.

Luck was on the Rayburn’s side on Saturday, because their seats were close to where Taylor’s mother was at. And as some of you know, Taylor announced earlier this year that her 57-year-old mother was battling cancer herself.

So when Andrea noticed the girl in the crowd, she felt a special connection with her. She invited her to sit in the seat next to her during one of T-Swift’s songs. It was an incredibly special moment for both Rayburn and Andrea, but the magical night didn’t end there. After the concert was over, Andrea took the little girl backstage to meet Taylor Swift. Little Taylor’s mother wrote about the experience on the “Project Team Taylor” Facebook page. She thanked the Swift family for making her daughter’s dream come true…

Taylor Swift’s mom noticed Taylor and let Taylor sit next to her for a song and at the end of the concert took us backstage to meet Taylor Swift!!!! Thanks Ms. Andrea, dreams really do come true!!!!

You see? It’s nice being nice.