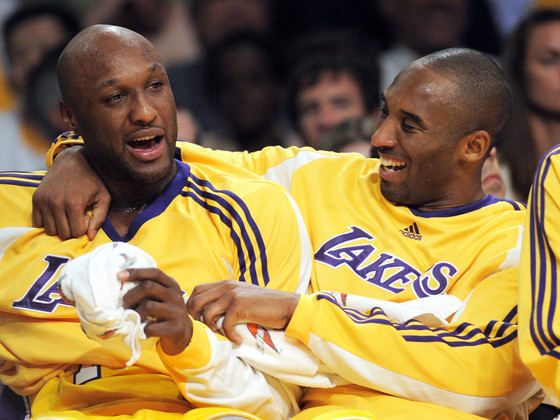 Kobe Bryant Talks About His Friend Lamar Odom, Says It’s Amazing To See How Well He Is Doing! Kobe Bryant is probably trying to focus on a million things at once right now with the start of the NBA season, but thoughts of his good friend/former teammate Lamar Odom never leave his head. As some of you may remember, he was one of the first ones to visit Odom in the hospital.

It’s clear there is a lot of love between them, and before the official start of the NBA season, Bryant talked to reporters about Odom’s situation…

It puts things in perspective a little bit more. This is what we do, this is not who we are. Sometimes basketball can get in the way of life and the way of living. He’s a brother above everything else…it’s important to see him get back on his feet. It’s amazing to see him doing so well. It truly is remarkable.

And Bryant wasn’t lying to the cameras, Odom is truly making a remarkable recovery. Those first 48 hours after the overdose were terrifying for his friends and family. Doctors weren’t 100% sure he would make it, but he did and now he’s making progress every single day.

He’s still receiving care from some of the best doctors in the world, and he’s still not completely out of the woods; however, we did learn more good news the other day. It looks like he will NOT need a kidney transplant. There were rumors going around claiming Rob Kardashian had already agreed to donate one of his kidneys, but it looks like that information was false.

Like we mentioned above, Odom has a wonderful team of professionals helping him in this recovery. He’s receiving treatment every day and continues to make small steps toward a full recovery.