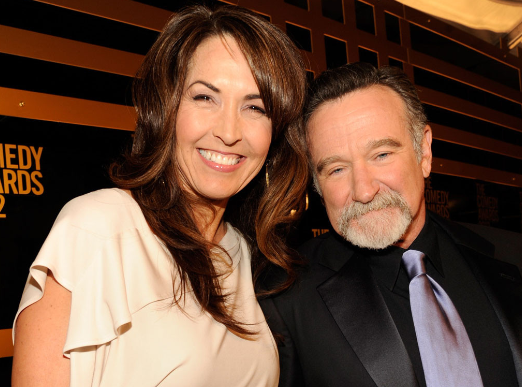 The Widow Of Robin Williams Opens Up About His Death, Says She Knows What Truly Killed The Comedian Possibly one of the funniest and nicest humans ever passed away in August of last year. Robin Williams’ suicide hit me harder than almost any other celebrity death, and for over a year now I’ve done a great job of pretending it never actually happened.

But now we must talk about it. Susan Schneider had been with Robin Williams for seven years. She was well aware that she had a wonderful husband, and she loved every single minute they spent together. And earlier this week, she sat down with Good Morning America‘s Amy Robach to talk about her husband’s suicide. For over a year now, we’ve all assumed he committed suicide because he was depressed; however, Susan believes there was something else going on. She talked about his post-death diagnosis with Lewy Body Dementia, claiming it was the silent killer no one knew about.

“In November of 2013, he had a little gut pain. Next month, it was another symptom. It was like this endless parade of symptoms and not all of them would raise their head at once. It was like playing Whack-a-Mole. Which symptom is it this month? I thought, ‘Is my husband a hypochondriac?’ We’re chasing it and theres no answer. By now we tried everything.”

The disease is basically a build up of protein on the brain that breaks down your mental and physical capabilities over a painfully slow time. Those who have watched family members slowly die from the disease say it was one of the hardest things they’ve ever had to deal with.

Lewy Body Dementia killed Robin. It’s what took his life and that’s what I’ve spent the last year trying to get to the bottom of. He was keeping it together as best as he could, but the last month he could not. It was like the dam broke. I think he was just saying no and I don’t blame him one bit.

And that last line is something people need to focus on. I have seen some nasty comments directed toward Susan, saying things like “It doesn’t MAKE you commit suicide! That was his decision. He killed himself.” Yes, we all know that. I think what she meant is that Robin knew he was losing control. He was terrified of what was happening, so he decided to go out the way he wanted.

In any event, the most important part is that we remember how incredible this man was. Susan claims it was the best love she ever had…

It’s the best love I ever dreamed of. You know, it’s what I always dreamed a love would be. My favorite movie of Robin Williams was Robin Williams being a human being, not an actor—the best movie in the world.