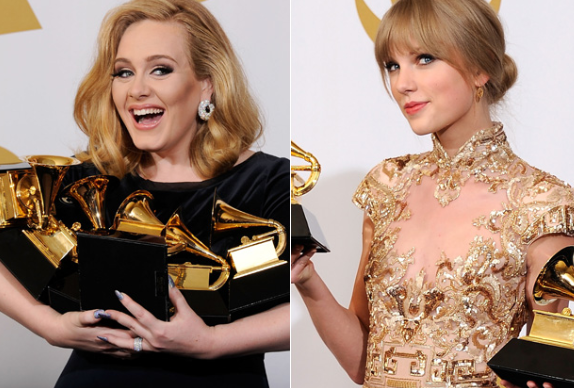 Adele Doesn’t Seem That Interested In Taylor Swift’s Squad, Find Out Which Star She’d Rather Have! Adele and Taylor Swift are two of the most powerful singers in the world, so it only makes sense to ask them both questions like, “Will you be teaming up with each other in the future?” But it doesn’t look like that will be happening anytime soon.

After becoming the first artist in history to sell a million copies of a song in the first week of its release, Adele decided it was time to get on the cover of Rolling Stone. And during her lengthy interview with the magazine, the 27-year-older singer talked about a lot of things, including Taylor Swift’s circle (squad?) of supermodels. According to the magazine, Adele looked “amused” when the reporter asked her about teaming up with T-Swift. She then talked about her own #squadgoals

I’ve heard about a squad. I wish my squad was all supermodels. We are, in our brains. I guess I have my own squad. It’s not as interesting as some of the other squads that are around right now. But maybe Rihanna can be in my squad! That would be really cool. Oh, God. She’s life itself, isn’t she? I love her.

That’s right, Adele wants Rihanna to join her squad. It seems like an odd choice, but I mean who wouldn’t want this booty in their squad?

Back in 2012, Rihanna admitted to being a huge fan of Adele, but she also made it clear she had to stop listening to her album because it was making her too depressed.

The last album 21 just spoke to me so much – to the point where I had to stop listening to it ’cause it was depressing me so much. You become so attached to the stories, it’s really something you identify with.

That’s probably one of the best compliments you can give an artist. I can see why Adele wants Rihanna in her squad.