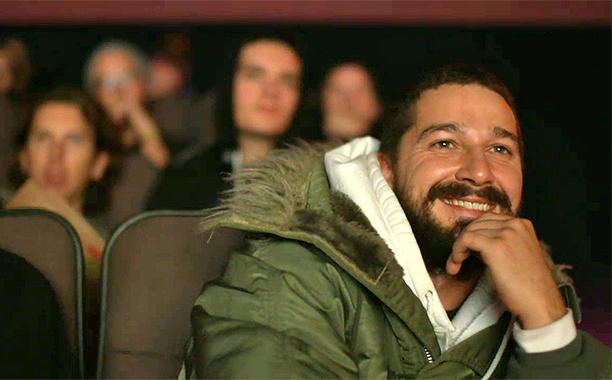 Shia LaBeouf Talks About His “#ALLMYMOVIES” Experience, Admits He Was Afraid Audience Would Throw Popcorn At Him It’s been exactly one week since Shia LaBeouf walked inside a New York City movie theater to watch all of his movies in reverse chronological order. For three straight days he sat inside the same seat, ate the same foods (pizza, popcorn and candy) and watched himself slowly get younger on the big screen.

If you would like to see the highlights from this surprisingly interesting event, you can click here to see all the wonderful GIFs.

In a recent interview, the 29-year-old actor talked about how he felt after the last movie played. He admits that he came out loving himself, and not in the way you might expect.

All I want to do is be liked. I walked out loving myself. Not in some grandiose, you’re f—ing awesome way, but in like, you’re a part of a community. You’re part of this human thing. You’re in this human thing.

And the community part of this whole thing is not something Shia expected. In fact, he was afraid people would throw popcorn at him or even light his hair on fire. “You just don’t want anyone to hate you.” He said during the interview.

One of the most magical moments of the event came on the last day while watching the Even Stevens Movie. It was clearly a crowd (and Shia) favorite. Everyone was laughing and reliving their childhood in a way.

If you look at the freeze frames, everyone is smiling like, wow, I remember Beans. I remember that stupid-ass song. We were all looking at our yearbooks together and we’re all in the yearbook.

Of course, not every movie was a hit. Shia admitted he took naps during a few of the movies. Not because he was super tired, but mainly because he couldn’t handle what he was watching, “In fact, I’m gonna go take a nap cause I hate myself, not cause I’m tired, but because I’m dying right now. And nobody had a problem with that.”

And yes, one of those “I hate myself” moments came while watching Transformers 2…

Transformers 2, they could feel when I sunk in my seat. That’s not a performative thing. That’s me going through some kind of crisis.