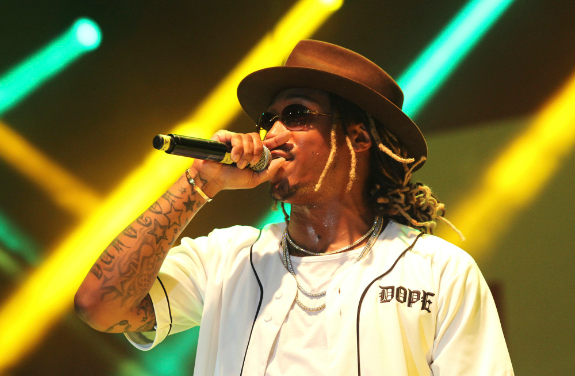 Future’s Tour Rider Reveals How Much He Makes For 45-Minute Show, Also Reveals His Love For Junk Food! It’s always a great time when a star’s rider is released online. It lets us know who the “real” people are in the music business. There are some celebs who ask for simple items, and there are some celebs (we looking at you Beyoncé) who demand some truly ridiculous things.

Yesterday, TMZ got their hands on a rider from one of Future’s shows last December. The 32-year-old rapper might not have the most extreme list of demands we have seen; however, it’s clear he’s making the most out of this extravagant lifestyle.

Show promoters must hook him up with a nice selection of drinks, including four bottles of Ace of Spades, Moet and Ciroc. Why does he need all those drinks? To wash down all that junk food he’s eating! According to the site, Future loves “fresh white powdered” doughnuts, chicken fingers, cheddar popcorn, and for some reason he asked them to throw in some broccoli.

In addition to the food and drinks, he also needs scented candles to help him relax in his dressing room. His favorite scent is lemon grass, which is a little surprising. We thought it would be a different type of grass.

Another interesting piece of information? The dude makes $150k for a 45-minute show! HE MAKES MORE MONEY IN 45 MINUTES THAN YOU DO IN A YEAR, AND PEOPLE GIVE HIM DOUGHNUTS AS AN ADDED BONUS!

And people expect me to be ‘thankful’ for my crappy life? Forget that. You can keep your turkey, mashed potatoes and pumpkin pie. Give me $150k, broccoli and doughnuts.