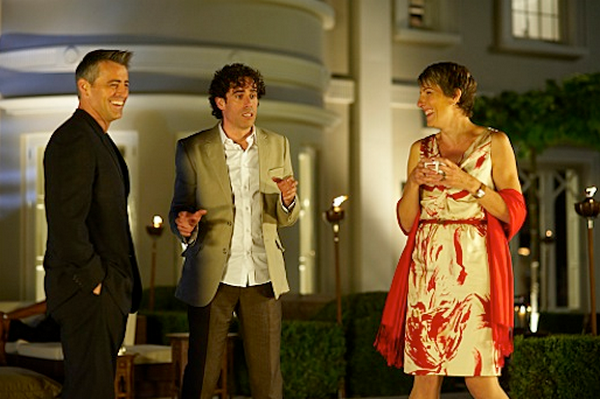 5 Reasons Why You Should Support The 5th (And Final?) Season Of ‘Episodes’

Still haven’t watched a single episode of Episodes? You shouldn’t feel alone. It’s not exactly the most popular TV series out there, but I believe it is one of the best. The series premiered on Showtime back in 2011 and has enjoyed four moderately successful seasons.

Most critics have showered the series with positive reviews, and Matt LeBlanc took home the Golden Globe Award for Best Actor — Television Series Musical or Comedy for his performance in the show. Earlier this year it was announced the show would be coming back for a nine-episode fifth season, and some people believe this will be the final season.

And they probably believe that because LeBlanc suggested it during an interview with Deadline, “I’m also looking at stuff, looking at life after Episodes is potentially over—this is probably going to be our last season—so I’m talking to writers about potentially developing another show.”

So with the next (and probably final) season coming soon, I thought it would be nice to invite you all to the best party you never knew about.

Check out the 5 reasons why you should buy your ticket for the Episodes train. I’ll try to do this without spoiling anything. No. 5 – Myra Licht And Her Beautiful Faces

You see that wonderful face? You get to see that face in almost every episode. Myra Licht, played by Daisy Haggard, is one of my favorite characters on the show. We don’t really know anything about her life. She only manages to get out one full sentence per season, but you always know exactly what she’s thinking, thanks to her assortment of faces and the unnatural noises coming out of her mouth.

It’s almost as if someone shaved off one of Andy Rooney’s eyebrows before he died, and then used the hair to create a cat/woman hybrid named Myra.

The personality of Andy Rooney, the noises of a cat who hasn’t had a full meal in years, and the body of an attractive woman. That’s Myra Licht. She is your new best friend. No. 4 – The Friendship Between Carol And Beverly

You might think you and your best friend have the greatest friendship in the world, but you’ll probably change your mind after watching Carol and Beverly’s friendship evolve into something magical. They do all the things you do with your best friend (smoke pot, jogging, eating, gossiping) it’s just they do them better. Episodes is smart, hilarious, and sometimes touching. Pucks! is basically every CBS sitcom thrown in a paper bag full of dog sh-t and cinnamon buns. Obviously I need to explain myself because you probably have no idea what Pucks is.

Pucks is the show within a show. It’s the thing connecting all these wonderful characters, but it’s also the thing most of these characters absolutely despise. What started off as Bev and Sean Lincoln’s successful British sitcom Lyman’s Boys, quickly turned into a miserable American remake called Pucks, thanks to Matt LeBlanc’s terrible ideas.

If Pucks were a real show, it would have already been canceled by now. It’s full of your typical sitcom jokes and characters. The writers and actors behind the show have no passion for the project. They all realize it’s terrible, but they love the money too much to let go.

It’s everything Episodes isn’t, which is what makes it so great. The writers and creators of Episodes are allowed to quietly make fun of your average sitcom while producing their own, above-average sitcom. No. 2 – The Return Of Matt LeBlanc

I think we can all agree that Matt LeBlanc (Joey) was the best part of Friends. Well, maybe he was a close second behind Jennifer Aniston’s nipples. The point is, it’s hard to hate Mr. LeBlanc, even when he’s playing the worst version of himself.

He is wonderful in this show. You see glimpses of Joey, but for the most part his character is fresh, intriguing and even a little exhausting because he never seems to learn from his mistakes. But for some reason, you still love and support his character. You want to see him win…AND YOU REALLY SHOULDN’T BECAUSE HE’S A FREAKING SELF-CENTERED A**HOLE!

But you have to give LeBlanc credit for pulling off the character perfectly. It’s not just me who thinks he’s doing a great job. As mentioned above, he’s won a Golden Globe Award for his work on the show, and he’s been nominated for four Primetime Emmy Awards.

Hopefully he’ll finally win one next year. He deserves it. No. 1 – And The Man Who Keeps It All Together (barely)

Speaking of deserving things, Stephen Mangan deserves all the things. He deserves that banana you’re eating right now. How did I know you were eating a banana? I didn’t, but it’s one of the most popular fruits in the world, so I figured it would be a safe bet.

Anyway, Mangan plays Sean Lincoln in the show. The co-creator of Lyman’s Boys/Pucks and the husband of Beverly Lincoln. It’s hard to discuss just how brilliant Stephen’s character is without spoiling some pretty huge moments in the show.

Let’s just say life doesn’t seem to be a fan of Mr. Lincoln. That’s not to say good things don’t happen to him, it’s just they are usually followed by terrible things you wouldn’t wish on your worst enemy. Much like his co-star Daisy Haggard, Mangan has wonderful facial expressions. It seems like with each season, the writers give him more scenes to showcase his physical comedy skills. His acting style reminds me of Dick Van Dyke in The Dick Van Dyke Show, which surprisingly was a sitcom that originally aired on CBS.

And if I remember correctly, Showtime is part of the CBS Corporation, so they basically own all things good and bad.