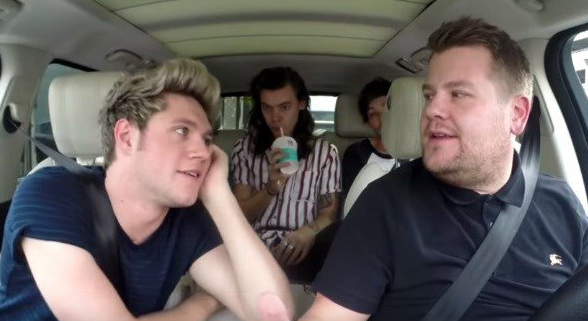 One Direction Goes To Work With James Corden In ‘Carpool Karaoke’ Video, Find Out What Niall Said About Selena Gomez! (VIDEO)

If James Corden’s Late Late Show was one hour of ‘Carpool Karaoke’ skits, I’d probably record his show every single night. It’s quickly becoming my favorite late show moment, and the most recent carpool ride with One Direction just continued the fun.

Harry Styles, Niall Horan, Louis Tomlinson and Liam Payne all joined Corden in his packed vehicle. And of course, they blasted several of their hit songs on the way to the studio. In fact, speaking as someone who doesn’t listen to a lot of One Direction songs, I wasn’t aware they had that many jammin’ songs.

As always, Corden steals the show. His voice gets better and better with each carpool karaoke video. He could honestly probably quit the whole “late night host” thing and chase his dreams of becoming a pop star. I won’t spoil the ending for you, but let’s just say Corden dropped some mad fire during One Direction’s Drag Me Down. The fire was so intense that I want them to release this version as a remix.

Also, Corden totally finds a smooth way of bringing up the Selena Gomez/Niall Horan romance rumors. The moment happens at around the 9:55 mark. Watch out for Liam’s face when Corden mentions Selena at around the 10:00 mark. It’s priceless.