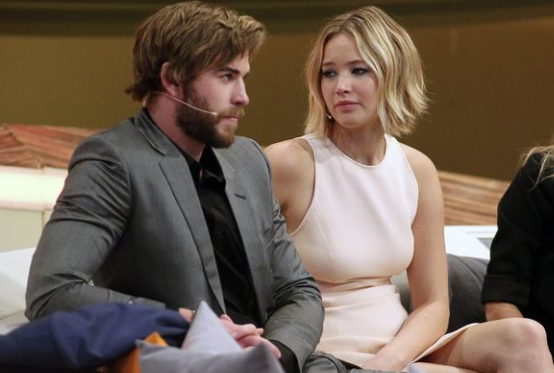 There is about to be a Hunger Games spoiler, so if you haven’t read the last book or watched the final movie, you might want to skip over this section of the post. For those cool people who have seen/read the ending, you know Katniss chooses Peeta and they even have babies together!

But in real life? Jennifer Lawrence had more of a romantic relationship with Liam Hemsworth, the actor who played Gale in the Hunger Games film franchise. During her first (but definitely not last) appearance on Watch What Happens Live, where secrets come to die, the actress buried some pretty interesting secrets.

One of those being a brief romantic relationship with Liam. When host Andy Cohen asked if she and Liam ever kissed when the cameras weren’t rolling, she replied with, “Liam and I grew up together. Liam’s real hot. What would you have done?…Yeah, I have.” And then Cohen revealed he would have picked Gale over Peeta any day, Lawrence laughed and said, “I did, at one point.” Makes you feel a little bad for Josh Hutcherson, huh? He and Jennifer seemed to have such great chemistry during interviews, but I guess it truly was more of a brother/sister relationship.

The actress was also asked if Bradley Cooper‘s kissing game was on point. She admitted he is a fantastic kisser and claims he’s not afraid to use his tongue…

Thankfully, they didn’t just talk about boys during her interview. A viewer asked Lawrence about that special dinner date with Adele and Emma Stone.

What did they talk about? And who paid for the meal?