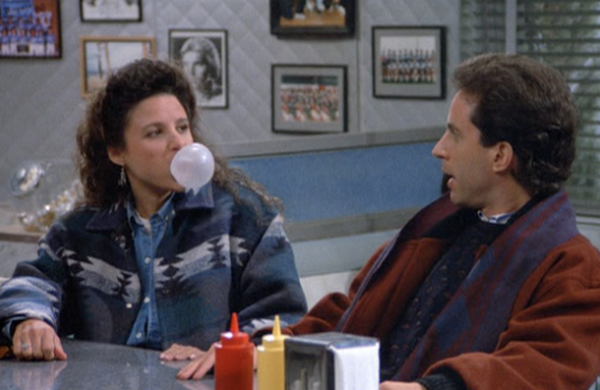 10 Things You Probably Didn’t Know About One Of The Greatest Television Shows In History, ‘Seinfeld’

One of the best shows in television history premiered over 25 years ago back in 1989. People all around the world are still watching reruns of Seinfeld. Sometimes it almost feels like it never left. People who were just a little too young to understand its greatness when it first aired are now discovering it and sharing it with their friends. It’s a show that will never die.

Seinfeld fans are always hardcore. It’s difficult to find someone who is just like, “Oh..it was okay, I guess.” Once you give the show a chance, there is no turning back. You’ll become addicted.

We got you covered… No. 10 – Elaine’s Father Was Terrifying On Set

Elaine’s father (Alton Benes) was going to be a recurring character on the show, but unfortunately the actor who played the character was unsettling. Lawrence Tierney was even more intimidating than the character he played on the show.

According to the reports, the cast and crew saw Tierney stealing a knife from the set of Jerry’s apartment while filming ‘The Jacket.’ When they asked him about it, he attempted to play it off as a harmless joke by pretend-stabbing Seinfeld. The director for that episode, Tom Cherones, revealed that “Lawrence Tierney scared me to death.“ Every Seinfeld fan has a list of their favorite episodes. Heck, some probably even carry the list inside their pocket, waiting for someone to ask them about it. It’s time to pull that list out so you can compare it to Jerry Seinfeld’s list.

His favorite episodes are: The Pothole, The Rye, The Contest, The Boyfriend and The Yada Yada. You can click here to watch a scene from ‘The Contest’ episode. And after watching that scene, you’ll probably want to watch the full episode. Even the greats needed Seinfeld during those dark times. The legendary director, responsible for the 1993 film Schindler’s List, admitted he got depressed while filming the movie. It was emotionally draining, and one of the only things that cheered him up was watching tapes of Seinfeld. According to IMDb, he’d watch the show every single night after he finished filming for that day. No. 7  – The Audience Loved Kramer

Before Michael Richards briefly lost his mind on stage, he probably played one of the most popular characters in television history. Cosmo Kramer was loved by just about everyone, including the studio audience. As the show continued to get more popular, producers were forced to tell the studio audience to cut down on their clapping when Kramer would stumble through Jerry’s door.

The cast claimed the long applause break would mess up the timing of the show, but also we have to imagine it made them think, “What about us?“ Jerry Seinfeld thought he had a brilliant idea when Julia Louis-Dreyfus became pregnant with her second child. It was during the show’s 8th season, and he suggested that instead of hiding her pregnancy, they should embrace it. He wanted to work in a side story that involved Elaine putting on some extra pounds.

But when he told Julia about his plans, she allegedly started sobbing, which put a snappy end to that idea. They decided to just hide her pregnancy with baggy clothes. It’s hard to imagine anyone else playing George’s father, but you original fans know John Randolph was the first Frank Costanza. He first appeared in ‘The Handicap Spot” episode, but he was then replaced with the hilarious Jerry Stiller. Fans watching the show in the U.S. probably had no idea about this because they re-shot those first scenes with Stiller for syndication. You can only watch the original version on the DVD.

When Stiller joined the cast, we still almost missed out on his brilliance. Larry David wanted his character to be more gentle and submissive to balance George’s extravagant mother; however, Stiller didn’t feel like he was doing enough. He believed he would be fired just like the actor before him, so he started yelling back at Estelle Harris (George’s mother) during rehearsals, and everyone loved it.

Check out his greatness in this blooper. No. 4 – The Parking Garage Ending

We all remember this episode, but did you know the last joke in the episode wasn’t in the script? The original ending had everyone getting in the car and driving around unable to find the exit, which would have been amusing after searching for their parking space for so long.

But the accidental ending was even better. Julia Louis-Dreyfus explained how it happened in an interview…

“We were supposed to climb into the car and go. And when we did, Michael [Richards] couldn’t start the car. It actually wouldn’t start. It was like God had actually given us a better ending to the script. We were laughing so damn hard that if you watch that episode, you can see — I think it’s Jason and me in the back seat, and our heads are bobbing, trying to stop our hysterical laughter, trying to keep it under control while the camera’s running.” You remember that classic line, “Hello, Newman”? Of course you do. Even people who haven’t watched the show probably make the connection when they hear someone use the line. Jerry must have said that line at least 100 times throughout the show, right? Wrong.

Jerry only says those famous words 16 times in the entire series, which averages out to be around twice per season.

Me? I still say it at least once a week when my wife walks through the door. God, I hate her. I’m just kidding…I don’t have a wife. I don’t even have a girlfriend, or someone to hug when I’m lonely. NBC wanted more Seinfeld, and they were willing to pay Jerry a lot of money. NBC was “showing him the money,” but he didn’t seem to care. It was reported that the network offered him a total of $110 million for a 10th season. He politely declined because he knew the show would have suffered. The writers were out of exciting ideas, plus, Jerry had already made a ridiculous amount of money. It’s not like he needed another season.

If only the stars of The Big Bang Theory would do the same.

There were a number of strange things about Jerry, but his collection of breakfast cereal wasn’t one of them. If anything, that was the most normal thing about him. If I could afford it (and I had the space), I’d also keep an unhealthy amount of cereal boxes in my kitchen.

By the way, Jerry claims he only eats oatmeal now because it’s healthier.