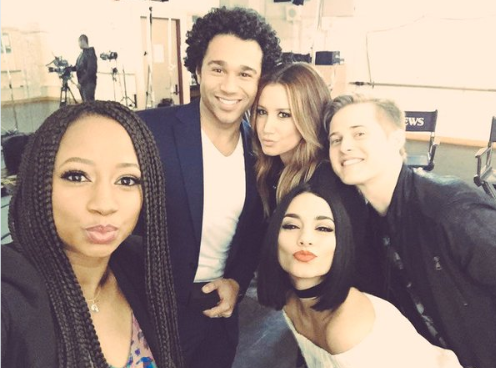 We’re All In This Together…Except Zac Efron! Why Didn’t He Show Up To The High School Musical Reunion? I’m not ashamed to admit I was a huge fan of the first High School Musical movie. I remember watching it for the first time at a friend’s house, and his mom walked in the living room looking all confused, “What is this sh-t?” She asked.

It was High School Musical! At the time, we couldn’t tell how unbelievably corny it was. And now almost exactly 10 years later, I still don’t care about the corn. It will always hold a special place in my heart, which is why I got super excited when I heard the cast reunited for a special 10th anniversary telecast coming up.

Most of the original cast members were there: Ashley Tisdale, Vanessa Hudgens, Monique Coleman, Corbin Bleu and Lucas Grabeel. But obviously there is someone missing from that list, and that someone is Mr. Troy Freaking Bolton played by Zac Efron. As you can see by the photos and video below, Zac Efron decided to skip the special reunion. Sources claim he was too busy promoting his ‘Dirty Grandpa‘ film. And while it’s true he is probably busy promoting the movie since it opens this week, it’s also true he could have cleared a day to make a special trip back to high school.

He will appear in a pre-taped message, so at least Efron fans can look forward to that. The special telecast of High School Musical, featuring this lovely reunion, will be aired on the Disney Channel Jan. 20 at 8 p.m.

It’s crazy how they all still look the same, especially Corbin Bleu. He could probably still get by with playing a character in high school.