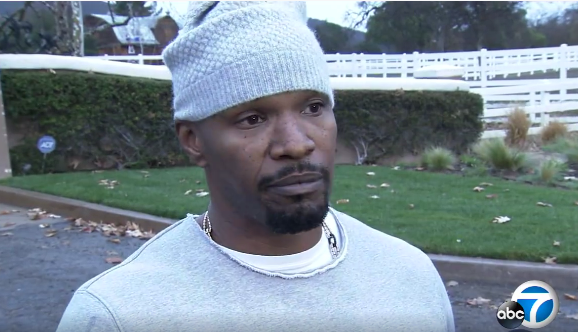 Jamie Foxx Is Being Called A Hero After Saving Man From A Burning Vehicle, Incredible Story Inside!

Most of the time, when we hear these stories about celebrities saving people and transforming into heroes, they’re usually super disappointing. The headline will read, “Brad Pitt Saves Dog From House Fire!” then you read the story and find out it was a stuffed animal, and the flames were contained to a lovely fireplace on the property.

But this story featuring Jamie Foxx is truly incredible. 32-year-old Brett Kyle was driving at a “high rate of speed” on Monday night when he flipped his truck into a drainage ditch, “It struck a drainage pipe and concrete casing causing the vehicle to roll over multiple times.” This according to a report from the California Highway Patrol.

Eventually, the vehicle stopped rolling and landed on its passenger side. Kyle was trapped inside while the truck “became engulfed in flames,” that’s when Foxx and another man came to the rescue.

The actor/singer explained what happened next to ABC 7 News…

“He has EMT scissors. He hits the glass, I climb in and try to hit his seat belt, but he’s hovered over, so the seat belt is on him. So I grabbed the scissors from him, cut the seat belt, but it’s on his neck. So I cut it off his neck. And then, as the flames do come into the cabin, I lean back, but I think what it did is it hit his legs, which made him extend. And when he extends out of the cabin, pull him out, and as we pull him out, within five seconds later, the truck goes up.”

The man was just seconds away from being burned alive. It was truly a life-saving situation. Paramedics arrived to the scene a few minutes later. Kyle was taken to the hospital to treat his injuries. He was then arrested and charged with driving under the influence of alcohol.

It doesn’t matter to me who it was, or what they do for a living, or whatever. Just the idea that someone would do that is so much more than I can fathom. it’s all tears of joy. He’s got two sisters and a brother, they would’ve lost their brother if it wasn’t for him.