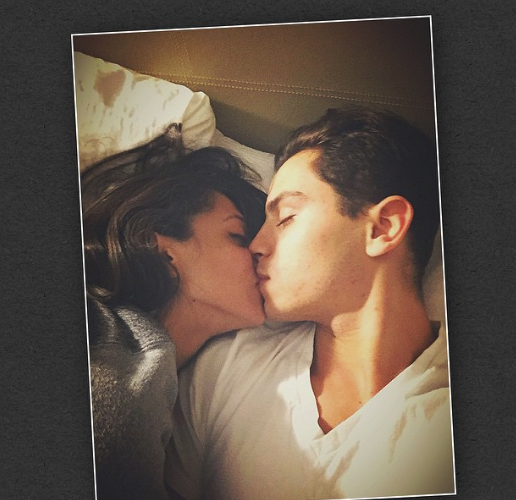 Are you obsessed with a celebrity? Do you have friends and family telling you to give it up? Saying mean things like, “THEY WILL NEVER LOVE YOU, JESSICA!!!” Well, you better tell your Uncle John to back the freak up, because sometimes miracles do happen.

You want proof? We got it. Disney Channel star Jake T. Austin (Wizards of Waverly Place), has officially fallen in love with a girl by the name of Danielle Ceasar. This is important because Danielle is not a celebrity. Heck, she’s not even a super hot waitress Jake met at some fancy restaurant in Hollywood.

Danielle is you. What do we mean by that? We mean she was at home, following Jake’s every move on social media and sending him dozens of messages on Twitter. Danielle’s obsession with the 21-year-old actor started back in 2009, when she sent out a tweet that read, “I wanna meet @jaketaustin so badly.”

Two years later in 2011, she got her wish. Their first meeting happened at a meet and greet… The two didn’t start dating after this first meeting; however, it’s clear Danielle made an impression on Austin because he followed her on Twitter the next day.

And over the next few years, Danielle’s obsession continued to grow… And then finally, after hundreds of borderline stalkerish tweets, Mr. Austin decided to give Danielle a chance. Three weeks ago, the actor posted the photo you see below to his Instagram account, with the caption, “I’m crazy for her <3” How do we know this is the same girl? Well, because she was the first one to share the photo on her Instagram account! Sadly she made her account private shortly after the love story went viral. Most likely to protect herself from the haters.

The actor released a statement to Us Weekly earlier this week…

We’re young and having fun just getting to know each other. It doesn’t matter how you meet someone — on set, in a coffee shop, at school, or in the business. Sometimes you connect with people at the right moment and you just click.

Translation? “She will LITERALLY do anything for me, bro! It’s amazing.”