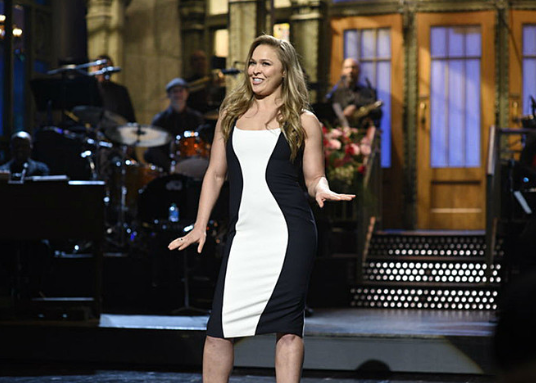 Ronda Rousey Hosts Saturday Night Live, Check Out What She Said About Holly Holm And Watch Her Hilarious Skits! (VIDEO) Ronda Rousey‘s first TV appearance since her shocking loss to Holly Holm back in November of 2015 was a pretty big one. The 28-year-old fighter/actress made her debut hosting Saturday Night Live this past weekend, and she provided the NBC show with some solid ratings. It was a smart move to invite her.

During her monologue, Rousey briefly talked about Holly, “And I just wanted to take a minute to sincerely congratulate her.” She told the live audience before adding that she did not suffer any brain damage, “And all those who are worried I’m not ready to host the show because I like, have brain damage, relax. I’m good. Besides, everything I need is on cue cards.”

Oh, snap! She got jokes, and you can watch them all in the videos below. We have the opening monologue, and three skits she starred in while hosting. I have to admit, her acting skills have obviously improved since she filmed her scenes in Furious 7.

What do you think? How would you rate her performance? And remember, there is a chance she could read your comment…just warning you.