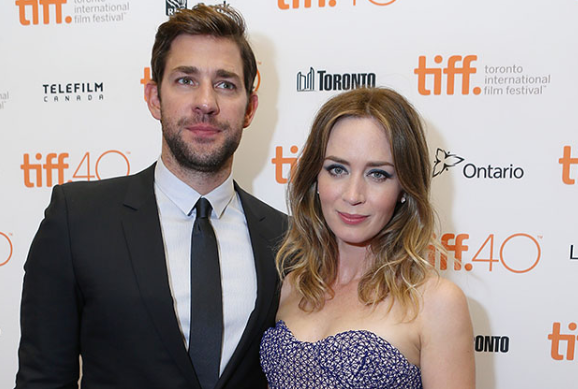 John Krasinski And Emily Blunt Are Expecting Baby Number 2, Plus Find Out Why John Had To Clarify His ‘Office’ Love With Jenna Fischer! It’s been a busy month for John Krasinski. He has been traveling the country promoting his new film 13 Hours: The Secret Soldiers of Benghazi, and now we have learned that his wife, Emily Blunt, is pregnant with their second child!

A rep for the couple confirmed the exciting news yesterday after rumors started flying around the internet. Their first child, Hazel, was born back in February of 2014, so it looks like they’ll have some exciting news to share with her on her birthday.

She is going to be a big sister!

Blunt and Krasinski are one of those strange celebrity couples who actually enjoy staying out of the spotlight, so you don’t hear them talk about their personal lives much. However, John did appear on the Ellen DeGeneres Show recently, and he talked a little about his daughter then.

She’s starting to do little bits, which is hilarious. Like if she’s looking for me instead of saying, ‘Daddy, Daddy,’ she says, ‘Where is that daddy?’ And she’s starting to pick up on Emily’s accent.

Okay, it’s not as funny in text form. You can watch a video of him discussing it at the bottom of this page. It’ll be worth your time, trust me.

But before we end this post, let’s talk a little about John’s old ‘The Office‘ love with the beautiful Jenna Fischer. We all wanted to have a love like Jim and Pam. They were one of the best couples on television. I’m pretty sure we all cried when Jim finally popped the question. Every single thing they did was so freaking cute. From the little looks they would give each other across the office, the pranks on Dwight, the dinners on the roof, etc. The writers did a brilliant job crafting that relationship. In fact, they did their job a little too well, because people started to believe John and Jenna were together in real life. Obviously that wasn’t the case (John married Emily in 2010). But that doesn’t mean their chemistry was fake. Here is what Jenna Fischer said last week when she was asked if she truly enjoyed being with John on set, or if it was just great acting.

There’s like a real part of me that is Pam and a real part of him that’s Jim and those parts of us were genuinely in love with one another. But in real life we aren’t totally Pam and totally Jim, so in real life we’re not the perfect match…he was like a type of spouse that I had for a long time, he was my partner and we will always be close because of it.

Of course, people took this quote and ran with it. They focused on the “genuinely in love” part and started adding things that weren’t true. Trying to cause some drama between Fischer and Blunt. But John defended his former co-star while talking with The Daily Beast…

I think that was wildly misquoted or taken out of context. I’m sure she was trying to say something nice about how genuine that acting relationship was, of bringing a relationship that became popular onscreen. As far as how she was quotes about saying we were ‘genuinely in love,’ I think that was taken wildly out of context and I feel bad for her.

There you have it, folks. Jim & Pam were a perfect TV couple. Emily Blunt and John Krasinski are a beautiful couple in real life.