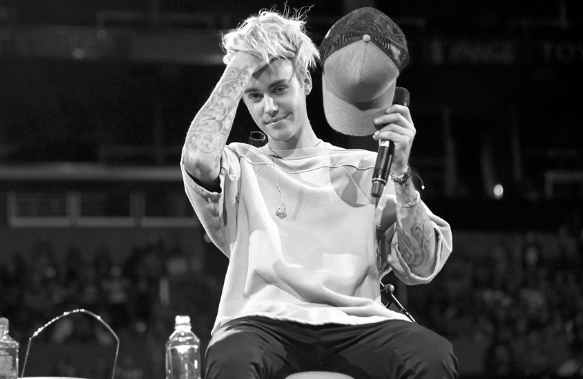 Was Justin Bieber Really Drinking Alone Inside A Gay Bar? We Have The Facts Inside! (PHOTO) How many times has a Justin Bieber hater walked up to you and said something like, “Justin Bieber is gaaay!”? It’s probably happened too many times to count. When I told my friends I enjoyed Bieber’s latest album, they almost kicked me out of a moving vehicle.

For some reason, the haters continue to promote these “gay” rumors, and earlier this week TMZ made it a little easier for them to make those claims. The gossip site posted the photo you see below, which shows Justin Bieber chillin’ with the bouncer at a North Hollywood gay bar called Club Cobra. And in their report, they claim Bieber was there by himself. They say he ordered one beer and talked with the bartender and staff, which admittedly sounds a little odd. We’re not saying a straight man can’t enjoy a drink at a gay bar; however, why would Bieber just randomly walk inside an empty gay bar to have one beer? It just doesn’t make any sense.

We did some diggin’, and it looks like the report from TMZ is false. The Biebs was inside the gay bar and that is the club’s bouncer you see in the photo, but Bieber didn’t just randomly decide to have a drink there.

According to the sources, the 21-year-old singer was there to celebrate a birthday party for two of his friends. He was reportedly with a group of people inside the bar, which shuts down the rumors claiming the bar was basically empty when he walked inside.

Honestly, it wouldn’t have been a big deal either way, but we thought it was important to clear up the rumors. It’s pretty obvious to everyone that Justin enjoys the ladies…