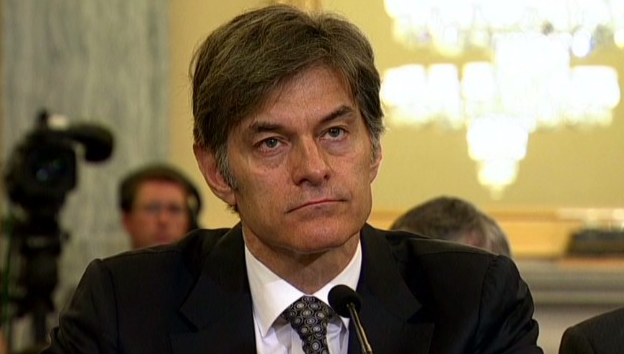 Dr. Oz Is Being Sued AGAIN By Angry Consumers For Promoting “Fake” Diet Supplement On His Show! It looks like Dr. Oz will have to fight in the courts one last time. He is getting called out again for promoting a “miracle” weight loss supplement that didn’t actually work at all. TMZ reports this time Oz is facing a class action lawsuit.

The supplement in question contains Garcinia Cambogia, which is reportedly a tropical fruit that is also known as Malabar tamarind. The magical drug was sold by a company called Labrada, and Oz was all over this product on his show. The suit claims the doctor described Garcinia Cambogia as a “revolutionary fat buster which could be the magic ingredient that lets you lose weight without diet or exercise.”

Now I’m not sure if this quote was taken out of context, but if you visit a doctor and they claim there is some magic pill out there that will make you lose weight without working out or eating right? RUN FAR AWAY FROM THEIR OFFICE! SERIOUSLY, RUN…BECAUSE THAT WILL ACTUALLY HELP YOU LOSE WEIGHT!

Anyway, the sales for this supplement obviously increased dramatically after Oz promoted it on his show, and now those angry consumers (who should have done more research) want their money back plus damages. They are going after Harpo Productions, Labrada and Dr. Oz.

A rep for Dr. Oz claims this new lawsuit attacks his right to free speech and also makes it clear he had no financial ties to the company…

As we have always explained to our viewers, the Dr. Oz Show does not sell these products nor does he have any financial ties to these companies.

We’ll see what happens. But just remember, nothing beats a healthy diet and some exercise. Stop looking for the easy way out, and don’t believe every single thing that some doctor on TV tells you. Do your own research.