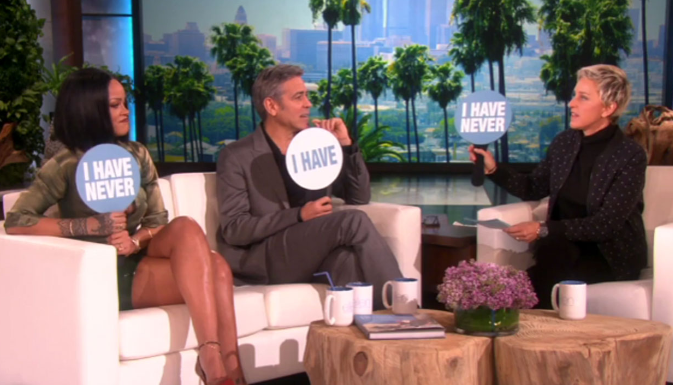 Rihanna And George Clooney Join Forces To Take On Ellen’s Hilarious ‘Never Have I Ever’ Game! (VIDEO) No one is able to get A-listers to open up about their personal lives quite like Ellen DeGeneres. Celebrities just seem to trust Ellen, which makes for some great television. She is constantly getting the best interviews, and Thursday’s show with George Clooney and Rihanna continued the tradition.

Ellen was able to convince both RiRi and Clooney to participate in a very personal game of Never Have I Ever. If you’ve never seen the game before, it’s pretty simple to understand. Clooney and Rihanna hold paddles with the words “I have” and “I have never” on them, and when Ellen reads off statements like, “Never have I ever texted a nude selfie,” they must answer truthfully.

Basically, it’s a game you don’t want to play while in a fresh relationship. And you probably want to avoid playing it while your Grandma and Grandpa are in the room.

Especially if Ellen is the host, because she’s not afraid to put you in some embarrassing situations. In the video below, Clooney and Rihanna have to respond to statements like, “Never have I ever seen a rapper naked,” and “Never have I ever sent a dirty text to the wrong person.”

Watch the hilarious video below. You will probably be surprised by a few of their answers…