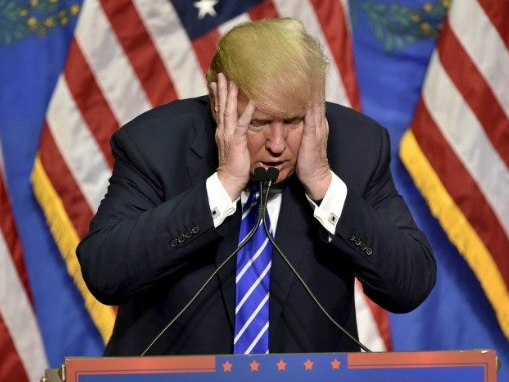 After a disappointing loss in Iowa, Donald Trump might be facing more trouble – because of an endorsement. Now yeah, presidential candidates want endorsements…from anyone but White Supremacists. In New Hampshire, voters were stunned by a new robocall endorsing Trump, saying;

Turns out three major leaders in white nationalist communities banded together in support of Trump after many of his views mirrored their own. The robocall was funded by the American National Super PAC, also known as the American Freedom Party. The group claims to support ‘white rights’ though is widely known as a supremacist group. In one statement, one of their leaders stated of the endorsement

Most white people would prefer to live in majority white neighborhoods and send their children to majority white schools, and deep in their bones, they are deeply disturbed by an immigration policy that is making the United States majority non-white. So when Donald Trump talks about sending out all the illegals, building a wall and a moratorium on Islamic immigration, that’s very appealing to a lot of ordinary white people.

Meanwhile, this campaign could be doing more to hurt Trump then to help him. Most of the responses received to the robocalls were negative. His group has disavowed any acceptance of the endorsement, stating;

Mr. Trump has disavowed all Super PACs offering their support and continues to do so.

After a loss in Iowa and this new problem, Trump’s campaign looks like it could be losing steam. That’s a shame. I was really looking forward to “Celebrity Apprentice – White House Edition.”