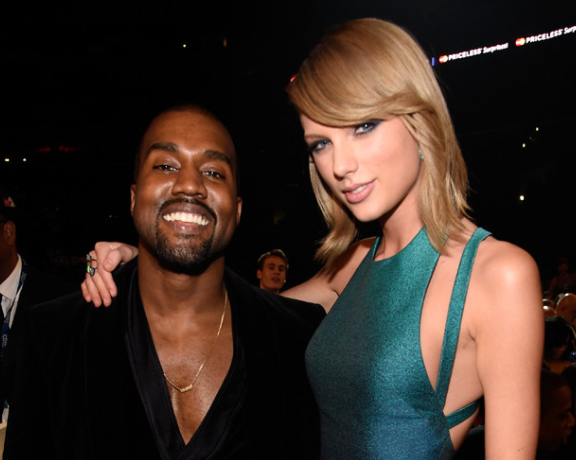 Kanye West Shocks The World By Slamming Taylor Swift In New Song, Check Out The Line That Has Everyone Talking!

Could this be round two between Kanye West and Taylor Swift? It’s starting to appear that way. You all know about their history. During the 2009 MTV Video Music Awards, Kanye rushed the stage to let everyone know he believed T-Swift didn’t deserve the award she was up there accepting.

Pretty much everyone hated West after the incident, even President Obama called him a jackass. A talented jackass, but still a jackass.

But then West apologized and for several years now it has seemed like things between him and Swift have been a-okay. They have snapped a few photos together, had nice things to say about each other during interviews, blah blah blah. What we’re trying to say is things got boring for a long time and there was nothing juicy to report. That’s changing now though. According to Swift’s rep, the 26-year-old singer did NOT give Kanye the “thumbs up” to release a delusional and hurtful lyric inside his new song Famous. He debuted the song during his Yeezy Season 3 event at New York Fashion Week on Thursday.

And everyone was shocked to hear this line…

Obviously, I don’t think anyone truly believes Kanye West made Taylor Swift famous. And instead of making some insignificant joke here, I figure it would be best to hit you with some quick facts. That incident at the MTV Video Music Awards happened in September of 2009.

Before that, T-Swift’s second studio album was already breaking records. The record-breaking singles, Love Story, White Horse, You Belong With Me, and Fifteen had already been released. The world was already falling in love with the singer before Kanye embarrassed himself on stage. Did the incident make people feel bad for Swift? Of course, but it has nothing to do with her fame. We all know Swift is famous because she knows how to write hits. It’s as simple as that. She is nice to her fans and has figured out how to write catchy songs that refuse to leave your head.

Kanye did not call for approval, but to ask Taylor to release his single ‘Famous’ on her Twitter account. She declined and cautioned him about releasing a song with such a strong misogynistic message. Taylor was never made aware of the actual lyric, ‘I made that bitch famous.’

Wait, what? Kanye wanted Taylor to release the song on her Twitter account? He has to be trolling, right? He’s either trolling or he’s freaking insane. That would be like Holly Holm asking Ronda Rousey to play video of her brutal head-kick finish at her own birthday party.

Kanye better watch out. You don’t want to make Swift and her “squad” angry because they have a lot of power.